Douglas County has deep roots in agriculture and livestock raising. With the Douglas County Fair & Rodeo opening on July 31st, let’s take a closer look at one lively aspect of the fair – 4-H.

4-H stands for Head, Heart, Hands, and Health. The organization is about as old as the Douglas County Fair (a century). Agricultural university programs nationwide partner to help youth build hands-on skills, responsibility, citizenship, and leadership. Many people associate 4-H with farming and agriculture, but today’s focus goes beyond that to include STEM education.

Footage from the Past 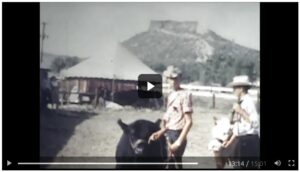 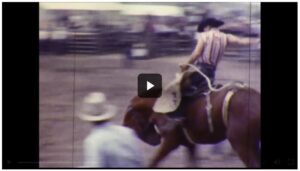 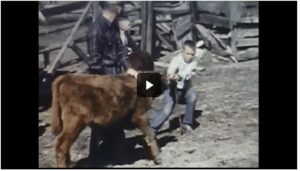 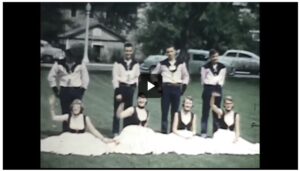 County and state fairs are a hot spot for 4-H programs, in which youths from ages 5 to 18 participate in contests from goat raising and gardening to cake decorating and handmade fashion. Douglas County 4-H even has a rocket contest! Historically, animal contests have been a popular choice. This footage dating to the 1950s and 1960s shows 4-H and Douglas County Fair events, especially livestock contents. You can also get a glimpse of a lasso spinning performance, a school band in the Douglas County Parade, livestock judging, bull-riding, and the Douglas County High School square dancing team. 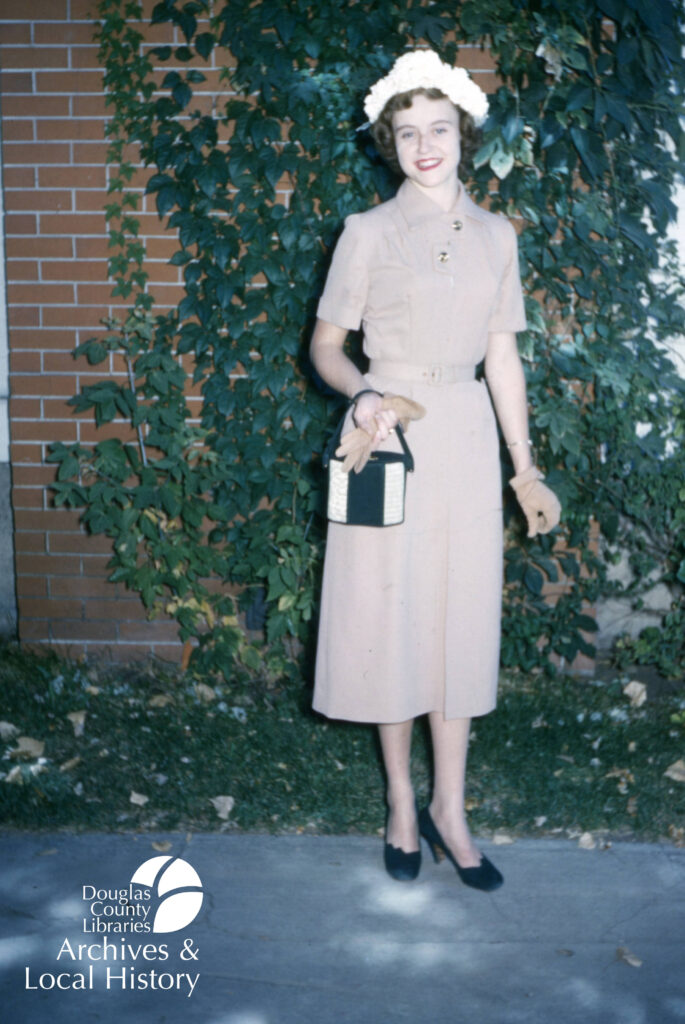 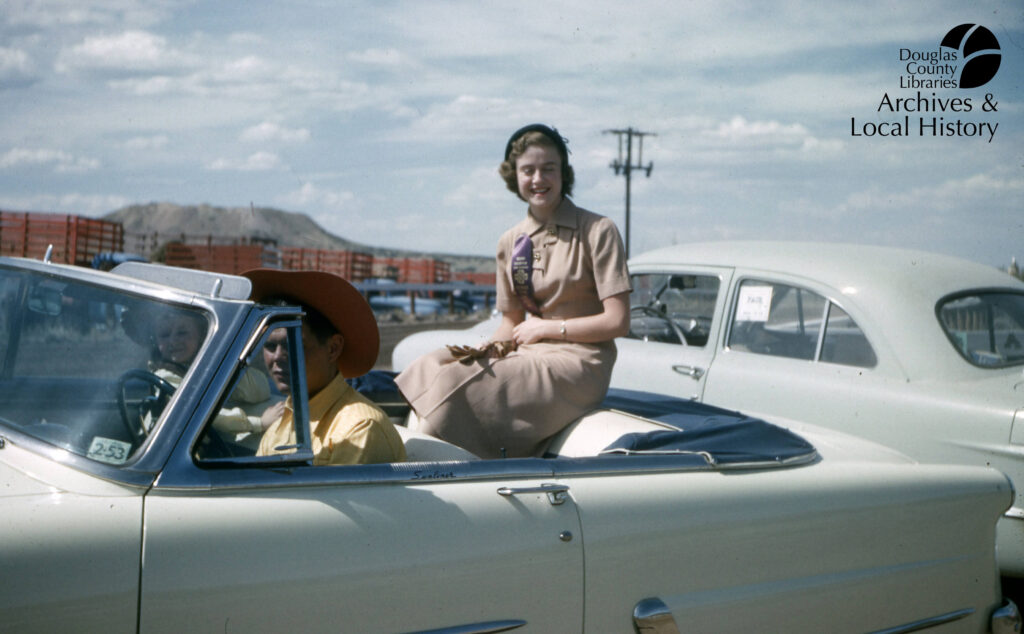 Contests in sewing and dress-making and sewing were also front and center in 4-H. Darlee Mikelson won the Colorado State Fair Dress Revue in 1953 and got to travel the Douglas County Fair’s parade in style. These photos to the left show Darlee’s handmade outfit and her moment in the spotlight on the back of a Ford Sunliner convertible during the parade. 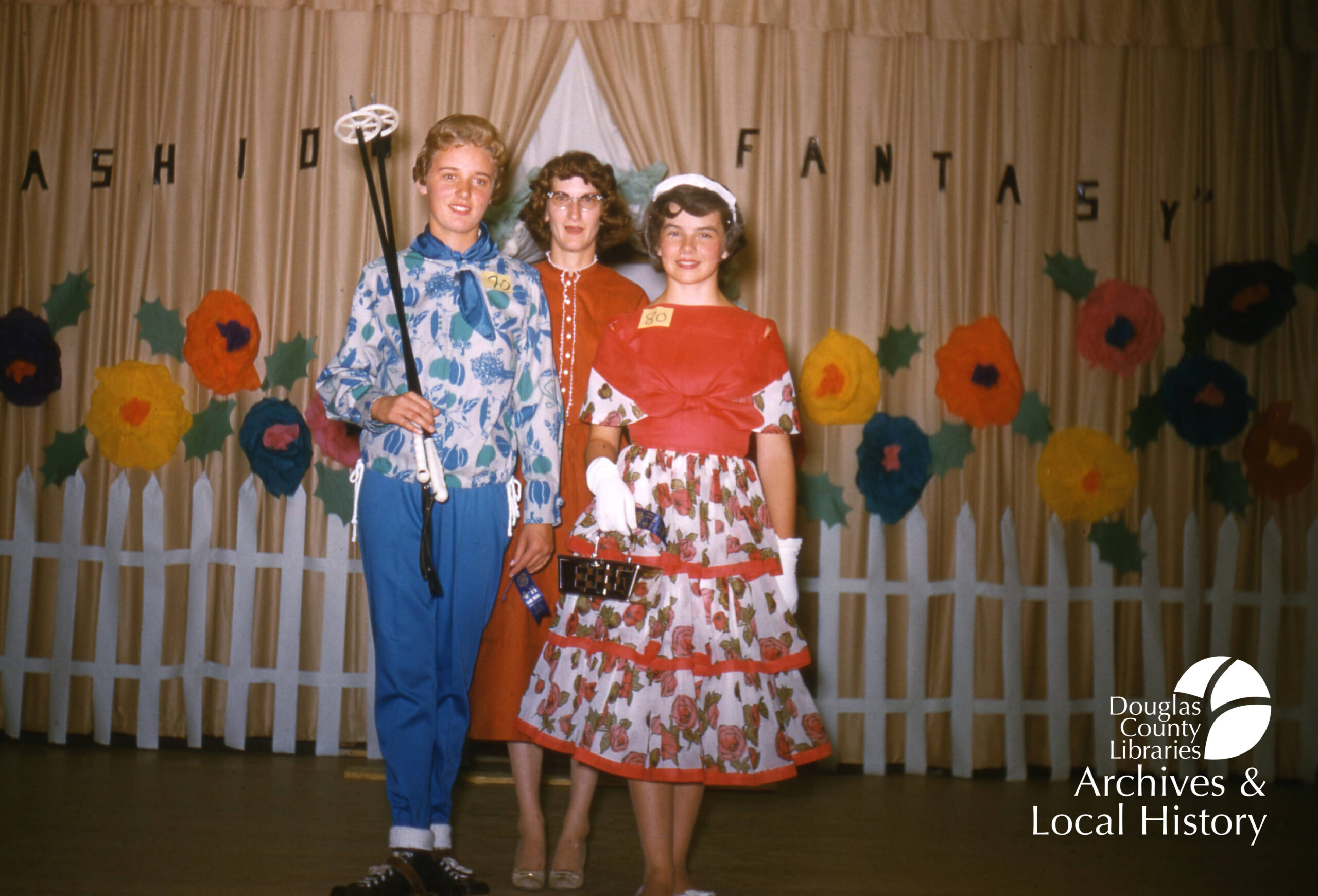 Sometime between 1955 and 1960, Frances Bos and Carolyn Stricker were 4-H Dress Revue reserve champions (runners-up). Francis Bos, on the left, made her own skiing outfit! Fitting for a Coloradan. The woman in the middle is Elizabeth Larson, a teacher.

A Cowboy from Down Under 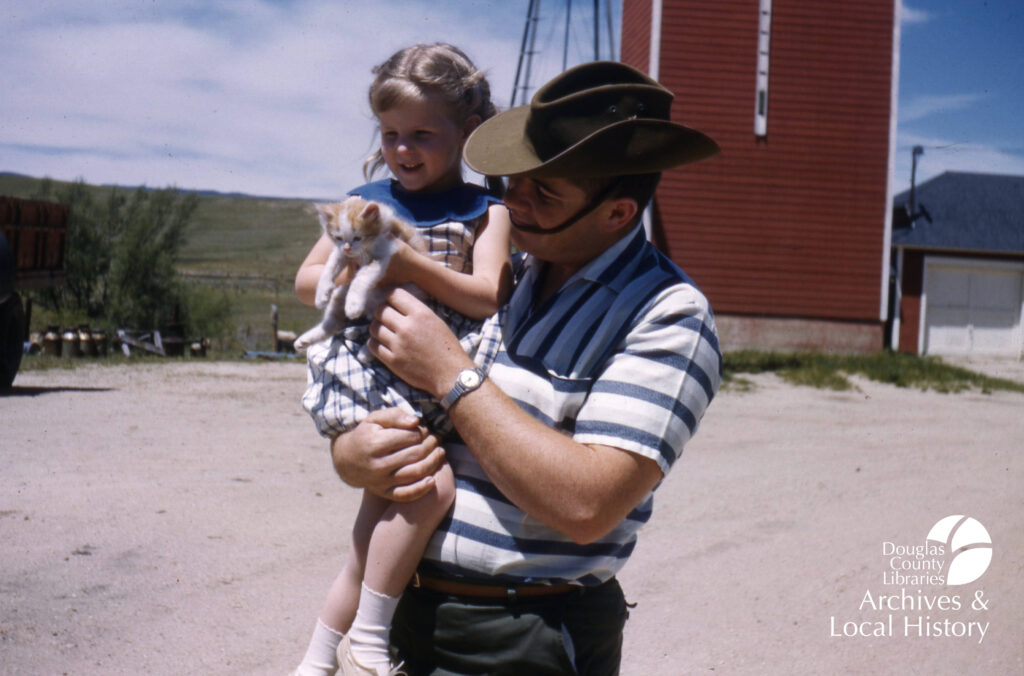 4-H was so popular in the early 1960s that International Farm Youth Exchange Delegate Peter Gill flew in from Spalding, South Australia to mentor Douglas County’s rural youth. He stayed with the Lowell family (Castle Rock), who have deep roots in Douglas County 4-H, and the Higby family (Greenland). By all accounts, he was a fun guy! 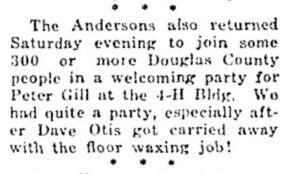 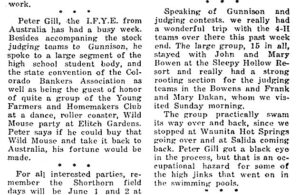 In summertime from at least the 1940s to the 1980s, 4-H clubs sometimes met up at 4-H Club Camp, including at Camp Shady Brook near Deckers. A state camp was also held at Camp Tobin near Pueblo. 4-H members hiked, fished, made crafts, and danced the Conga line! 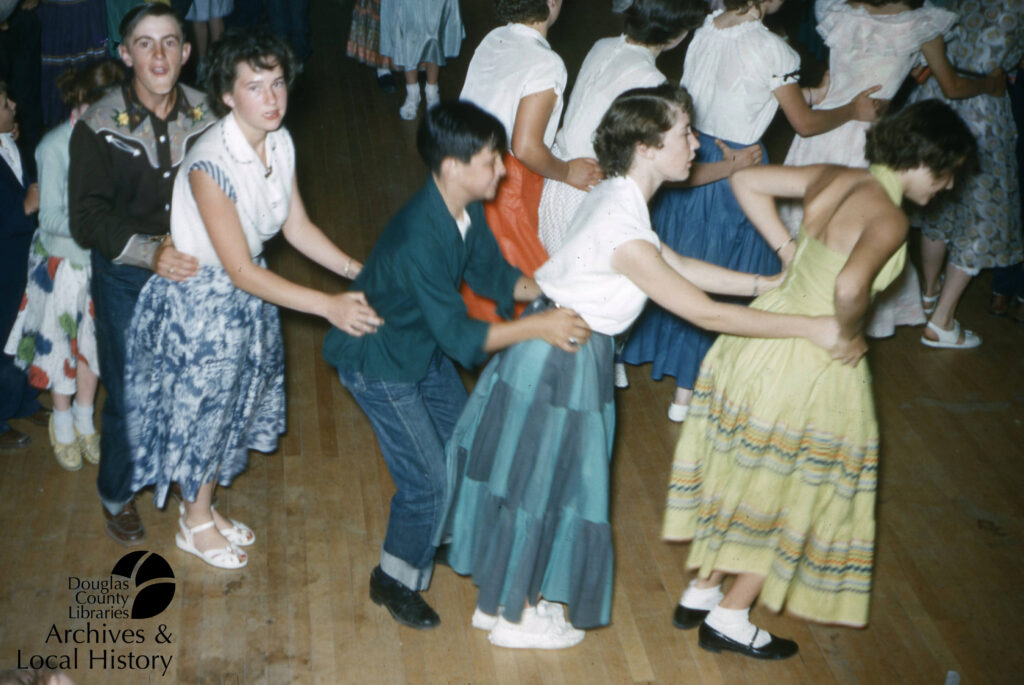 It was a great way for rural youth with shared interests to meet. Club members attended camp from across the county, and even the state. 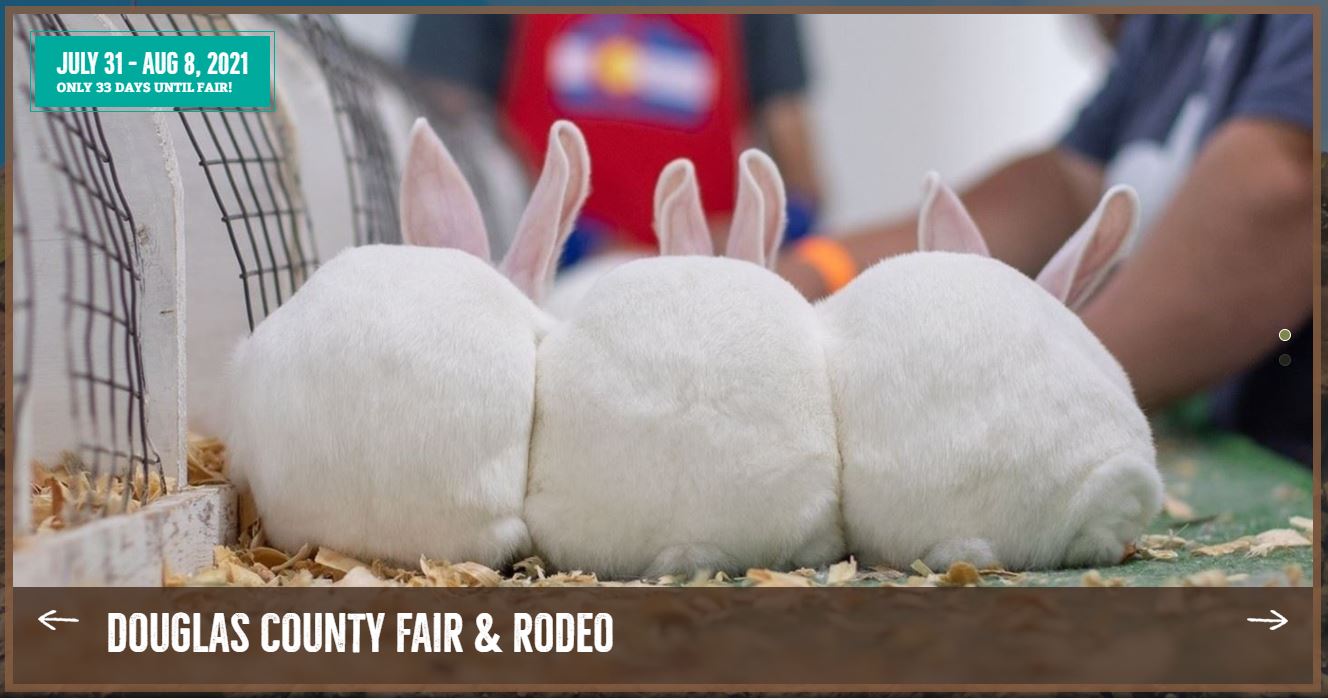 Douglas County Libraries Archives & Local History has plenty more historical records about the Douglas County Fair & Rodeo and 4-H. Our new display in the Archives & Local History reading room showcases some of our most interesting 4-H collections. Come and see it at the Philip S. Miller library through the end of August. Tag us @dclarchivists if you find the Christmas in July cameo!

4-H isn’t just a thing of the past. Youth can still participate today, with lots of county and state scholarships at stake. Enjoy this year’s Douglas County Fair & Rodeo from July 31st to August 8th at the Douglas County Fairgrounds.

Gold and silver usually come to mind when thinking about mining in Colorado. However, Douglas County made a name for itself with another geologic industry: quarrying rhyolite stone.

Colorado is renowned for its astounding variety of geological resources. Its geologic history includes supervolcanic eruptions, millennia of tropical sea sedimentary deposits, and the uplift and erosion of ancient mountain ranges. This constantly changing geologic landscape resulted in rich mineral and ore deposits like gold, silver, copper, lead, zinc, gypsum, lime and clay. Sandstone, quartz and granite abound in the state, as well as gemstones.

Unlike in mountain towns, though, gold and silver industries were limited in Douglas County. Gold mining took place from about the 1860s to 1880s in Russellville (near the head of Cherry Creek), but it did not produce large quantities. Other local profitable deposits included coal, lime and gypsum. Local clay was used to make bricks at brickyards and plants that operated near Castle Rock at the turn of the 20th century. The Silicated Brick Company, whose plant was located at the north end of Roxborough Park, created highly durable bricks by steaming and compressing silica sand and lime.

The major geologic industry in the county was the quarrying of rhyolite, a pink or gray volcanic rock formed from ultra-thick magma ejected in violent volcanic explosions. Castle Rock in particular is known for its rich rhyolite veins due to the Wall Mountain Tuff ash flow that occurred when Mount Princeton violently erupted 36 million years ago. Hot ash and pumice compressed to form tuff (a soft material not useful for building), but some formed thick deposits of rhyolite.

Rhyolite stone was hand-quarried and cut at quarry sites across the county, including the Santa Fe Quarry, the Madge (Douglas) Quarry, and the O’Brien Quarry. The work was astoundingly difficult, and in addition to the quarrying itself, it included the transport of water to the quarry sites and the construction of roads and rail tracks.

Silas Madge is credited with operating the first rhyolite quarry in Douglas County, beginning in 1872. In fact, the needs of its workmen spurred the construction of the historic town of Douglas, which was located a few miles south of Castle Rock. The Madge Quarry is described in detail in this article in the December 10,1948, issue of the Record Journal of Douglas County. The full article is also available in Archives & Local History’s reference serial collections, along with the Industry clippings binder, located in the Reading Room at DCL’s Castle Rock, Philip S. Miller, location. You can also browse the Archives & Local History website for more resources, including this oral history in which Douglas County residents speak about their memories of quarries.

Other Rhyolite Buildings in Douglas County

Stop by Archives & Local History in Castle Rock to check out our fall 2020 exhibit about quarries in Douglas County!

* This article has been updated to reflect a correction in Other Rhyolite Buildings in Douglas County.

Douglas County Libraries Archives & Local History (ALH) has put together the following activity packages to encourage learning about what archives do and how you can use these types of collections, even from home. Each topic contains a downloadable link to instructions and resource guides, along with fun activities you can do safely at home or in your backyard. Click the links to download the activity packages, then follow the instructions for a fun learning experience!

Educational Activities to Do From Home

ALH preserves some of the beautiful pressed flower herbariums from Sarah Bennett Walker, a local 19th-century botanist. Learn how to press and preserve your own flowers and get familiar with some of Colorado’s most magnificent wildflowers. Download or print this file to get started.

In this activity, learn to use common primary sources found in archives in order to understand the past. Douglas County’s infamous 1965 Plum Creek flood is used as the theme. Then, play a fun PBS game to learn how different cities protect themselves from floods using engineering and natural resources. Download this file to get started.

ALH has a large collection of local, historical cookbooks. Recreate this homesteaders’ recipe for wild plum jelly using plums found in Douglas County and learn about local edible plants and what cooking in the past was like. Download this file to get started.

Download and print these coloring pages from ALH’s photographs collection, and use your imagination to add color to images from Douglas County’s history. When you’re finished, show us your creations at localhistory@dclibraries.org!