ALH collects and preserves materials relating to Douglas County’s history, and right now we’re looking for items about local elections and political campaigns to help future researchers understand our current political climate. Instead of recycling your election materials, why not send them to ALH?

Donating to ALH is easy! Contact us to set up a drop-off time and fill out a Deed of Gift, and then you’re all set.

3. Organizational records – Are you part of a political group? Do you have meeting agendas, correspondence, or other administrative documents?

5. Materials on any issue, candidate or affiliation! 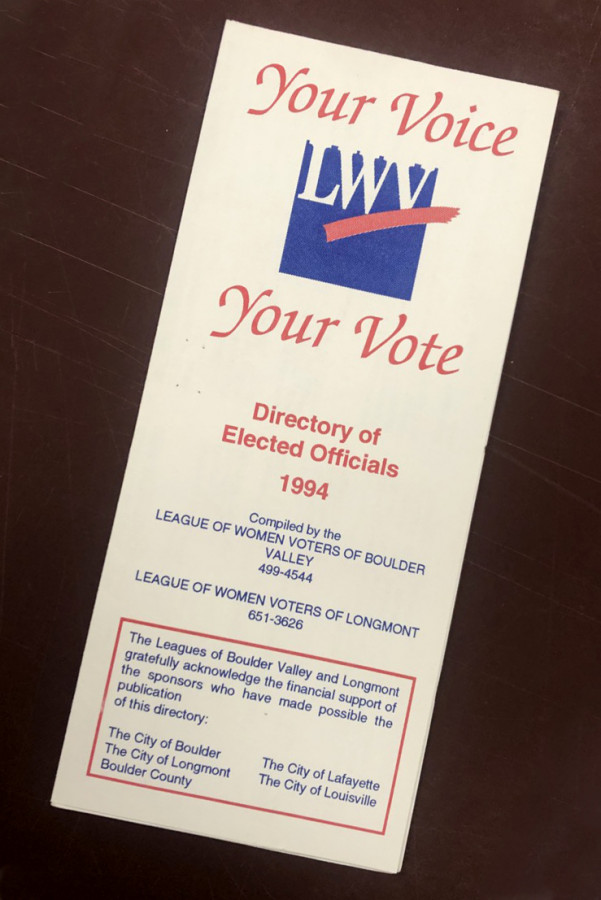 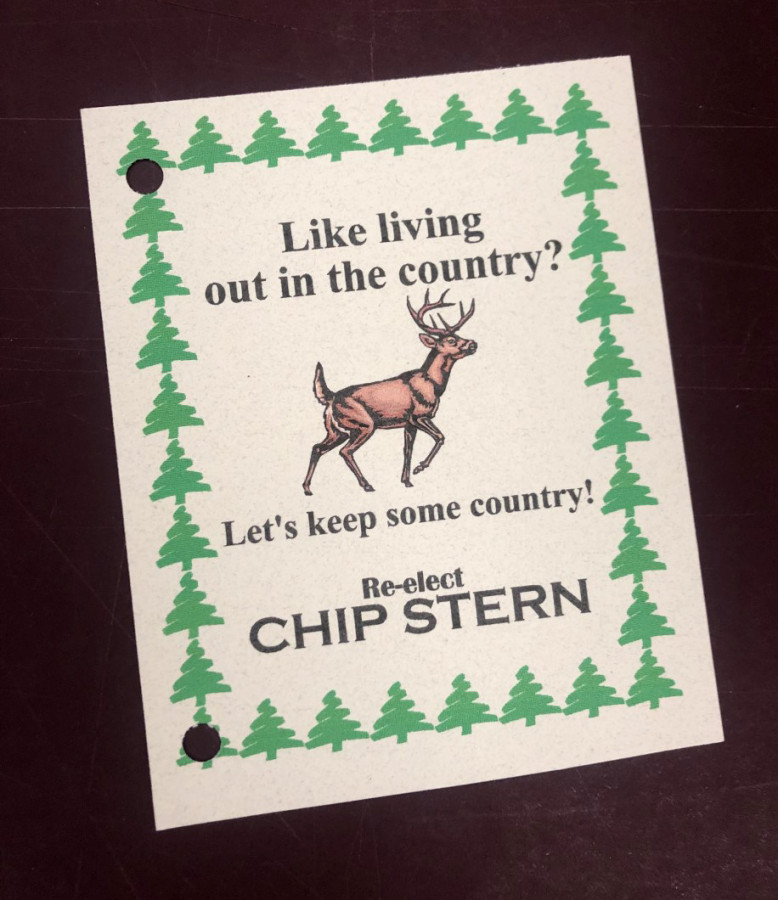 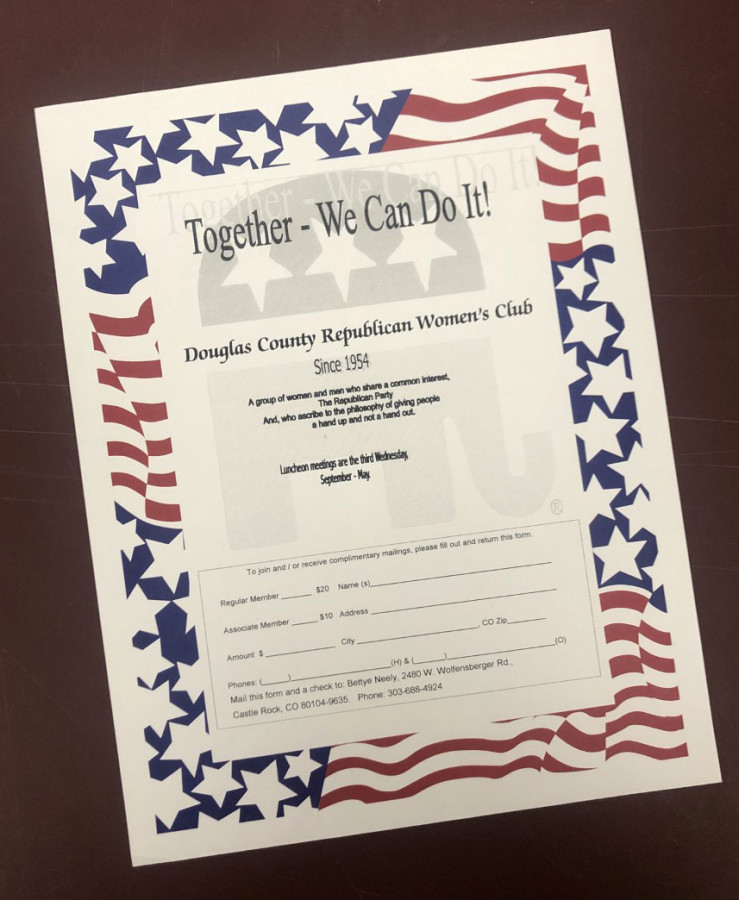 Items don’t have to be related to the 2020 election, but they should adhere to the following:

1. Legal size or smaller – We aren’t looking for yard signs or large banners at this time.

2. Clean and dry – We cannot accept wet or mold-affected material.

If you have any questions or wish to set up a donation, contact us at:

A mother, daughter, and local druggist met their deaths at Castlewood dam in November 1894. Eighteen-year-old Pearl Boyd reportedly clung to Alfred Stott as she cried out for someone to save her. Tragically, the raging water proved too much for Pearl and her mother, daughter and wife of the Castlewood Dam manager, as they, along with Mr. Stott, drowned.

The Denver Republican reported this devastating news on the morning of November 15, 1894, under the headline: “Three Lives Lost, Mother, Daughter and Guest Are Drowned.” Happily, the Denver Post exposed the article as a complete fabrication invented by the “deceased” Boyds’ 23-year-old son and brother. “Fooled the Republican: Three Denver People Surprised to Learn That They Were Drowned,” reported the Denver Post later that same day.

The source of the tall tale was Charles Boyd, who apparently had no problem spinning a yarn about his family’s death. His reputation was not stellar. Charles’s boss at the City Package Delivery Company Denver described him as irresponsible and no good.

Why Charles included Mr. Stott in the ruse is a mystery. Mr. Stott, shown in the photo, wore many hats during his time in Castle Rock. He clerked in a hardware store, operated a meat business, worked as a druggist, and served as both postmaster and sheriff.

Even though the drowning was falsified, the draw of Castlewood dam was real. The Castlewood reservoir and dam was a popular Douglas County recreation spot prior to the dam’s collapse in 1933. In her oral history, Cora Deane Younger remembers picnics and boat rides there. It was completely plausible Mr. Stott, Pearl Boyd, and her mother, Mrs. G. Eliza Boyd, would want to take a sailboat out on the water.

Gold and silver usually come to mind when thinking about mining in Colorado. However, Douglas County made a name for itself with another geologic industry: quarrying rhyolite stone.

Colorado is renowned for its astounding variety of geological resources. Its geologic history includes supervolcanic eruptions, millennia of tropical sea sedimentary deposits, and the uplift and erosion of ancient mountain ranges. This constantly changing geologic landscape resulted in rich mineral and ore deposits like gold, silver, copper, lead, zinc, gypsum, lime and clay. Sandstone, quartz and granite abound in the state, as well as gemstones.

Unlike in mountain towns, though, gold and silver industries were limited in Douglas County. Gold mining took place from about the 1860s to 1880s in Russellville (near the head of Cherry Creek), but it did not produce large quantities. Other local profitable deposits included coal, lime and gypsum. Local clay was used to make bricks at brickyards and plants that operated near Castle Rock at the turn of the 20th century. The Silicated Brick Company, whose plant was located at the north end of Roxborough Park, created highly durable bricks by steaming and compressing silica sand and lime.

The major geologic industry in the county was the quarrying of rhyolite, a pink or gray volcanic rock formed from ultra-thick magma ejected in violent volcanic explosions. Castle Rock in particular is known for its rich rhyolite veins due to the Wall Mountain Tuff ash flow that occurred when Mount Princeton violently erupted 36 million years ago. Hot ash and pumice compressed to form tuff (a soft material not useful for building), but some formed thick deposits of rhyolite.

Rhyolite stone was hand-quarried and cut at quarry sites across the county, including the Santa Fe Quarry, the Madge (Douglas) Quarry, and the O’Brien Quarry. The work was astoundingly difficult, and in addition to the quarrying itself, it included the transport of water to the quarry sites and the construction of roads and rail tracks.

Silas Madge is credited with operating the first rhyolite quarry in Douglas County, beginning in 1872. In fact, the needs of its workmen spurred the construction of the historic town of Douglas, which was located a few miles south of Castle Rock. The Madge Quarry is described in detail in this article in the December 10,1948, issue of the Record Journal of Douglas County. The full article is also available in Archives & Local History’s reference serial collections, along with the Industry clippings binder, located in the Reading Room at DCL’s Castle Rock, Philip S. Miller, location. You can also browse the Archives & Local History website for more resources, including this oral history in which Douglas County residents speak about their memories of quarries.

Other Rhyolite Buildings in Douglas County

Stop by Archives & Local History in Castle Rock to check out our fall 2020 exhibit about quarries in Douglas County!