July 30, 2022, marked the 50th anniversary of Evel Knievel’s appearance at the Continental Divide Raceways in Castle Rock, Colorado. Though we’re a little late to the anniversary party, we wanted to highlight a recent donation to the Archives & Local History collections: two photographs taken at the event by then 17-year-old Jim “Jimmie” Bensberg. 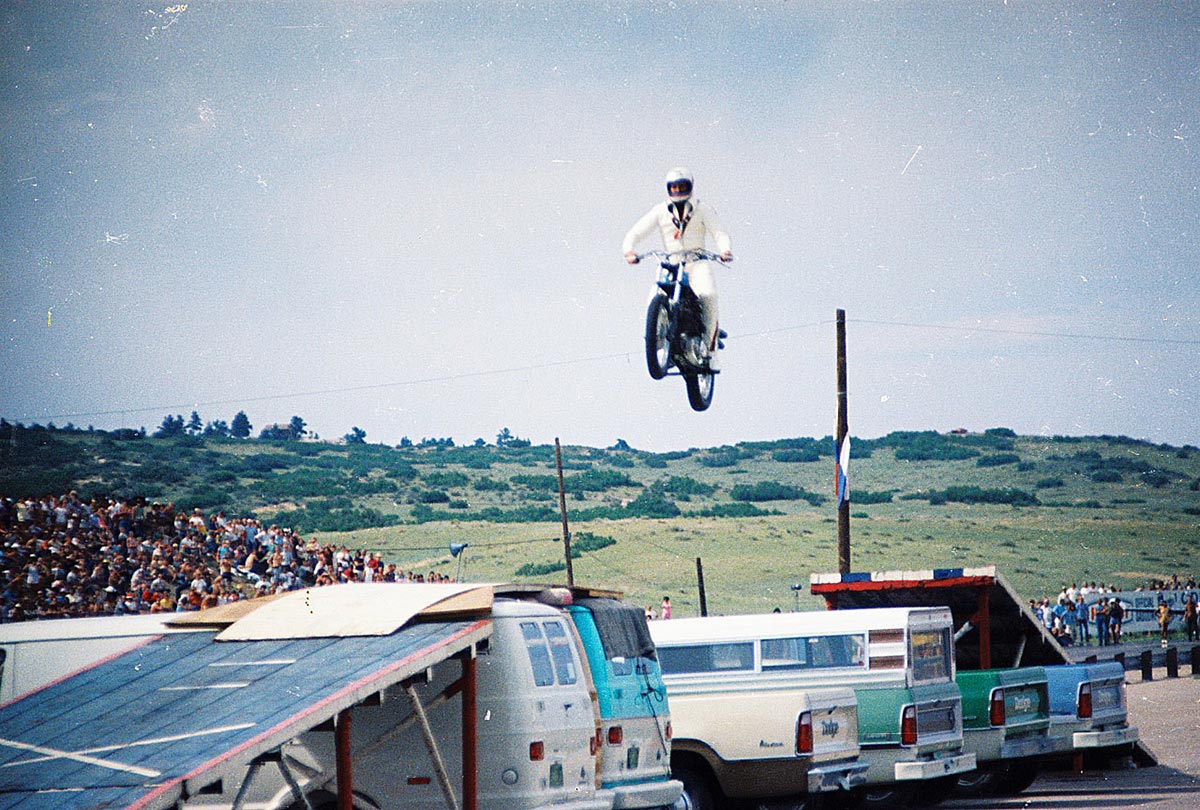 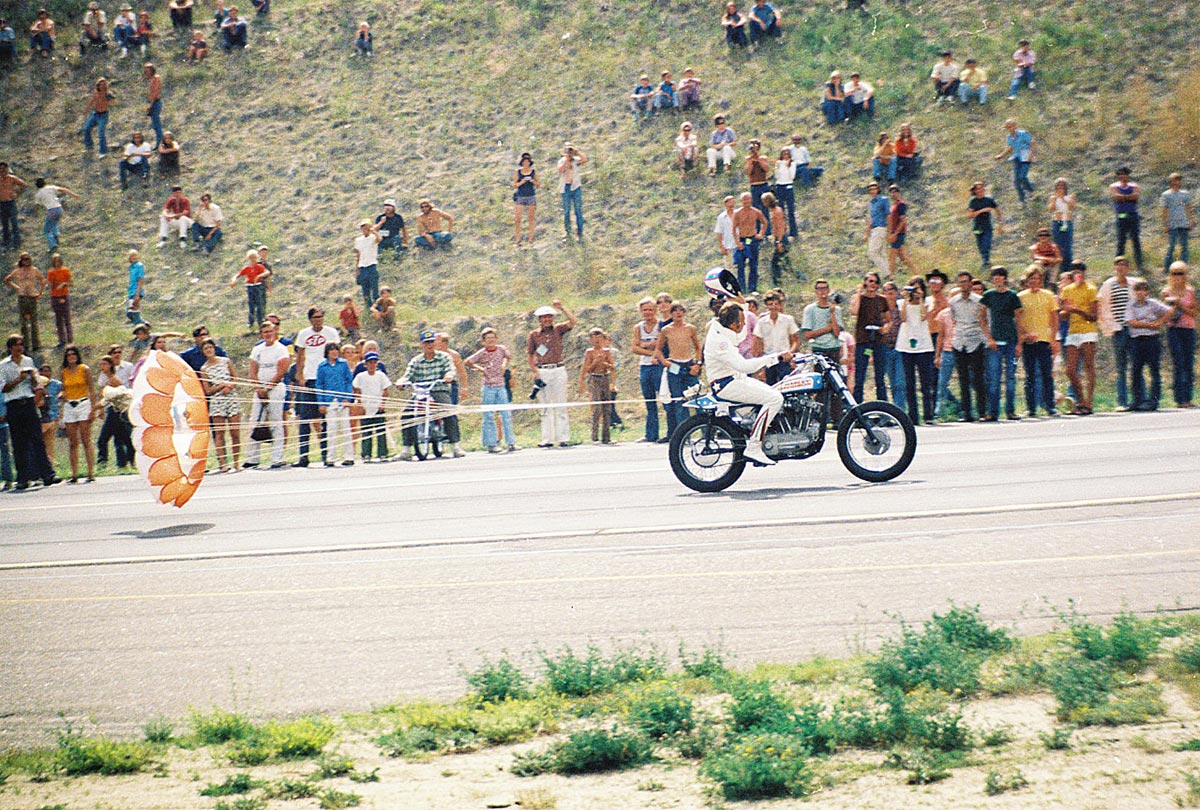 Bensberg was kind enough to donate the photographs from that momentous 1972 event. One photo captures Knievel mid-jump as he flies over a number of Dodge pickup trucks. The other shows his landing and the orange drag parachute used to slow him down. Both photos exemplify the daredevil’s colorful showmanship! Hear from the photographer himself in this interview with local television station 9News as part of its anniversary feature.

Continental Divide Raceways is gone now, but its outline can still be seen aerially. The Castle Rock Museum and Historical Society also has a virtual exhibit that you may browse online. 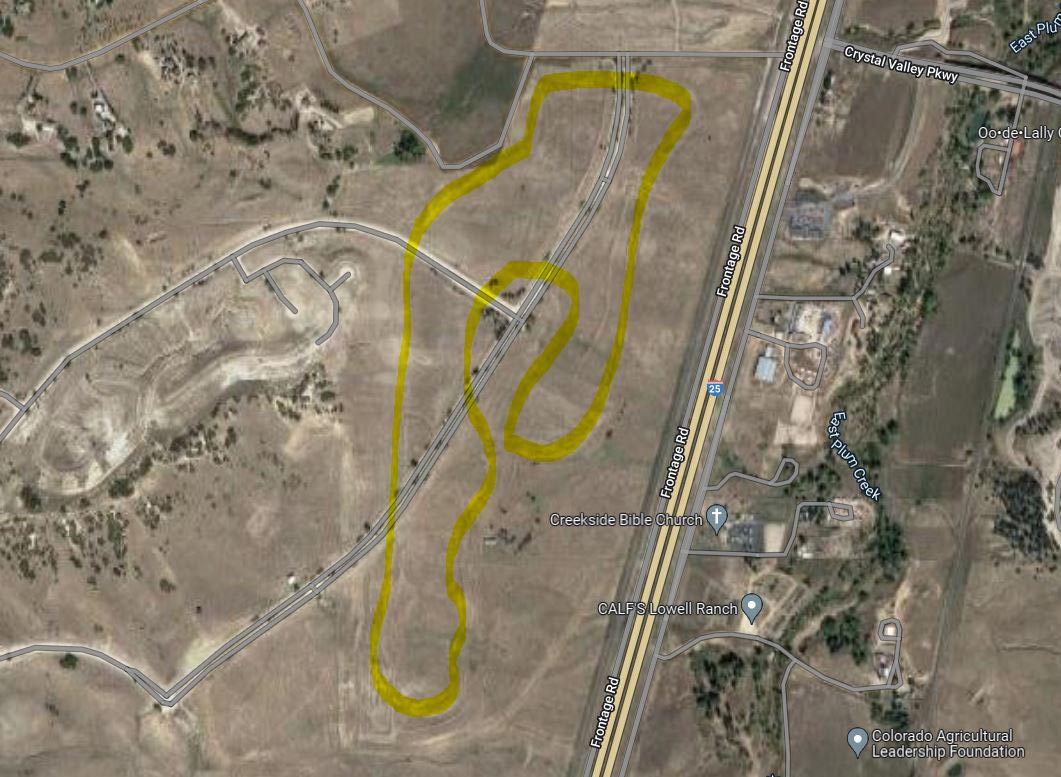 Were you at the event in 1972? Do you have stories from other events at Continental Divide Raceways? Share your memories in the comments!

Perry Park is known across Douglas County as a peacefully idyllic community nestled in the foothills of the Front Range. Its golf course and country club have attracted wealthy residents for decades. While peaceful indeed, its past is somewhat tumultuous.

This is the story of a very big dream, one that began with visions of a futuristic super-suburbia and ended with an escape to Mexico.

Colonel Lee Stubblefield was the quintessential 1970s high roller, leather boots and all (see images below). As president of the Colorado Western Development Company, he worked from an office shaped like a giant Mentos candy (or UFO, if you prefer—it was a creative time for architecture!). His home was a 16-bedroom “cabin” in Perry Park. 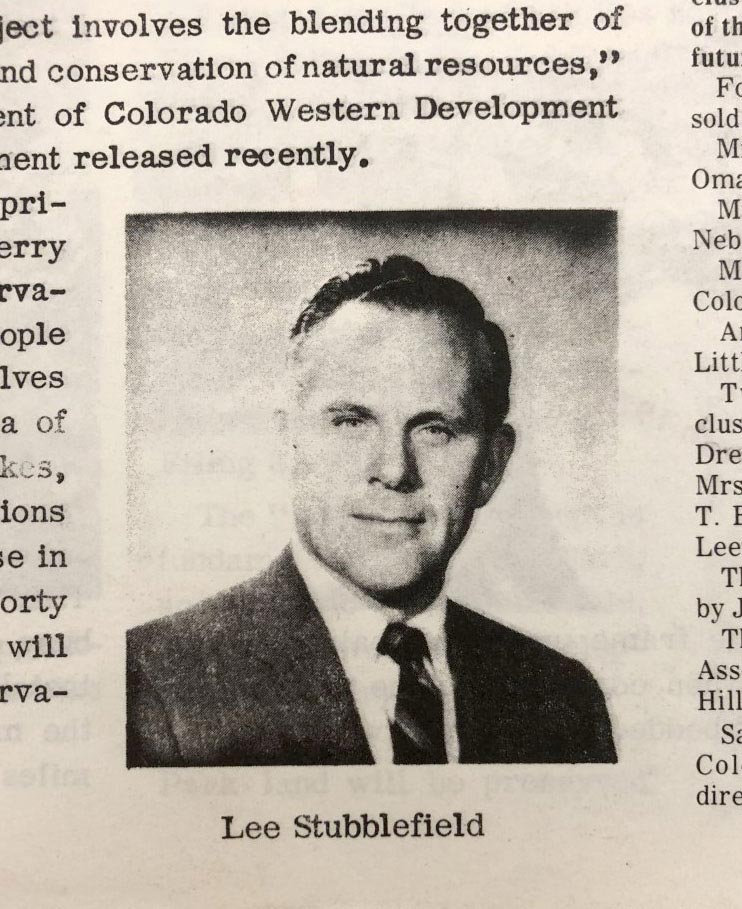 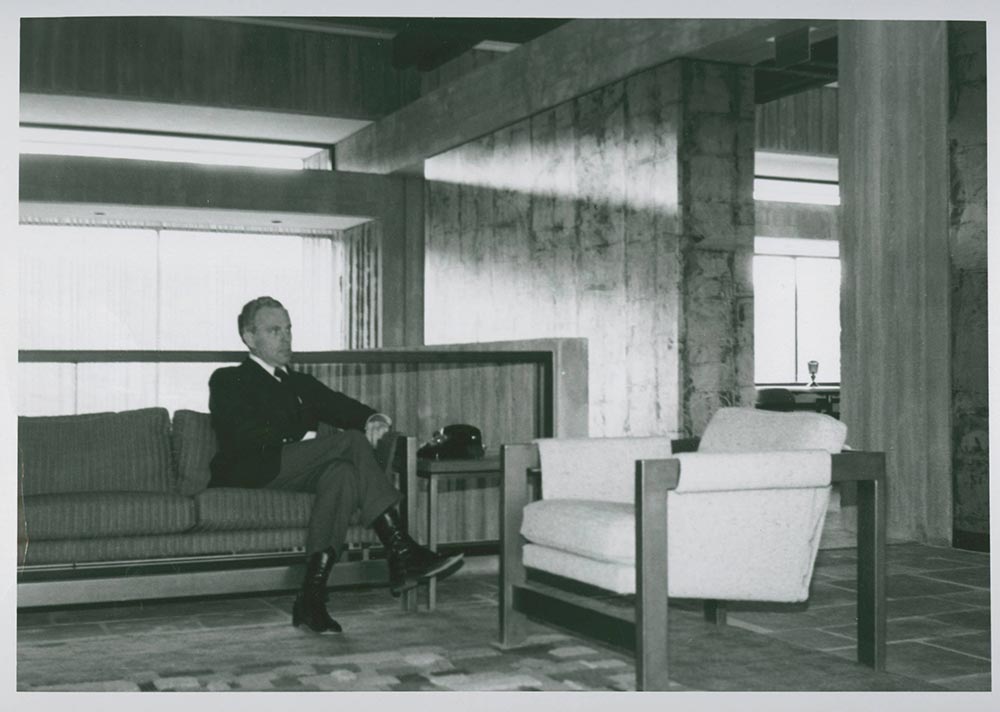 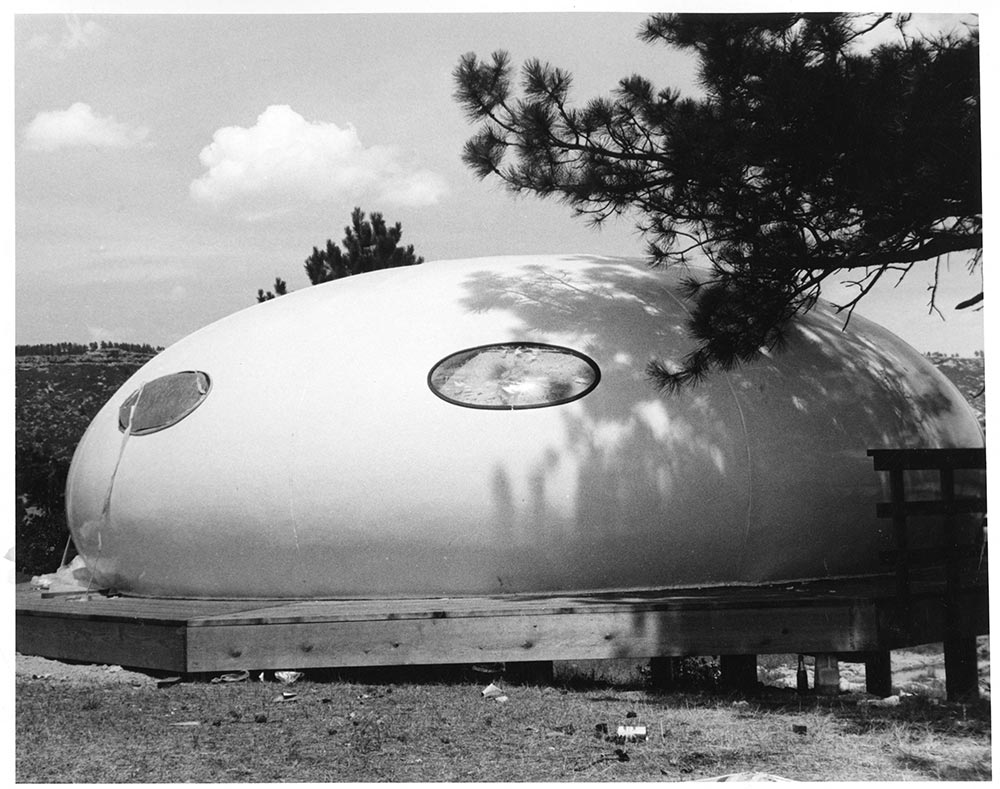 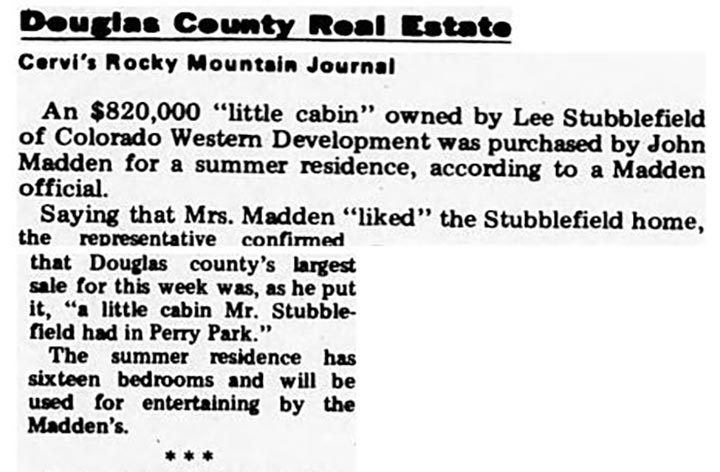 While Stubblefield was in the thick of the Echo Hills Club Internationale and Perry Park Golf Course projects, something else was brewing with Colorado Western. In 1970, Charles Gathers & Associates published a development plan on behalf of the company.

It proposed what was referred to as a “new town” concept, which would address the problems of racial and class segregation, overpopulation, and economic inequality—a big dream indeed. The idea was to create six villages and a central business district with a capped population of 105,000 people spanning the Perry Park area to Dawson Butte. Gathers & Associates reported apprehensively on the future mega-developments along the Front Range, citing air and water pollution, the unavailability of housing by the year 2000, and transportation problems. Their predictions weren’t off by much: They projected that by 1980, Colorado’s population would be 2.8 million with 80% concentrated along the Front Range. In reality, it was 2.9 million—and it’s now 5.7 million.

To address these issues, the 100% Planned Community Development (PCD) of Perry Park would be self-sustaining, supporting an internal economy for all classes. It would humbly include:

*On the fifth day of Christmas, Lee Stubblefield gave to me: 69 churches, 10 post offices, 5 libraries, 2 man-made lakes, and a cultural complex with concert hall! 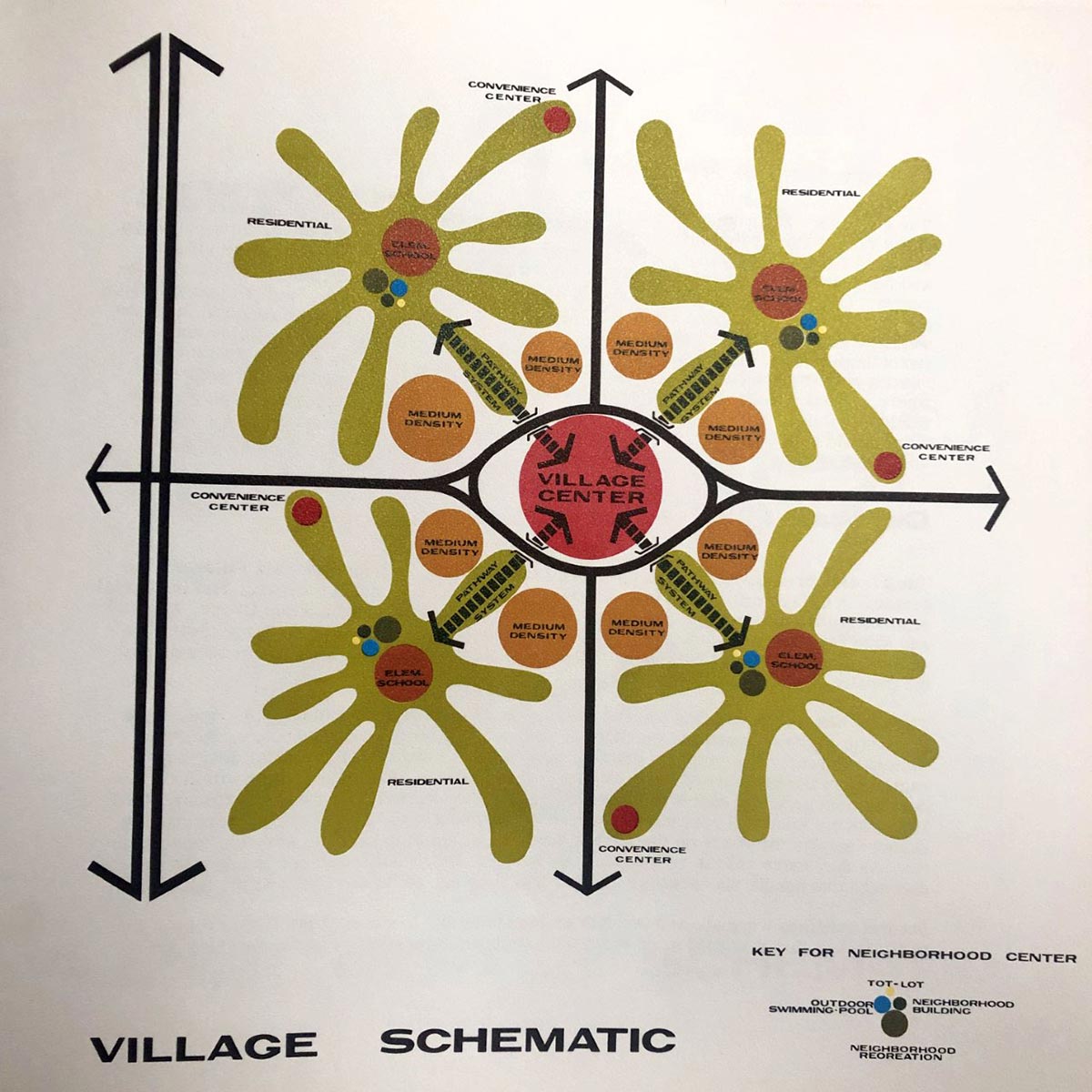 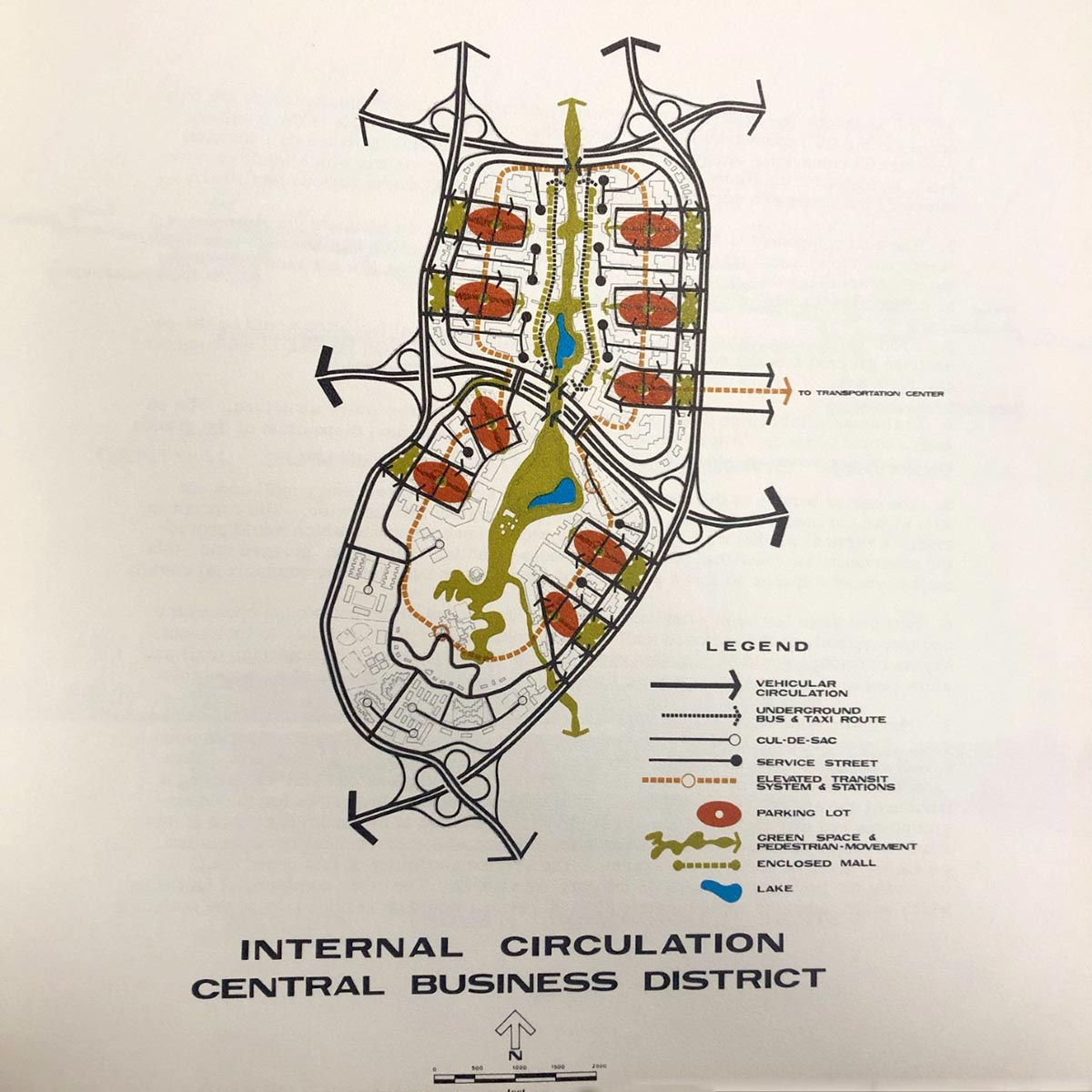 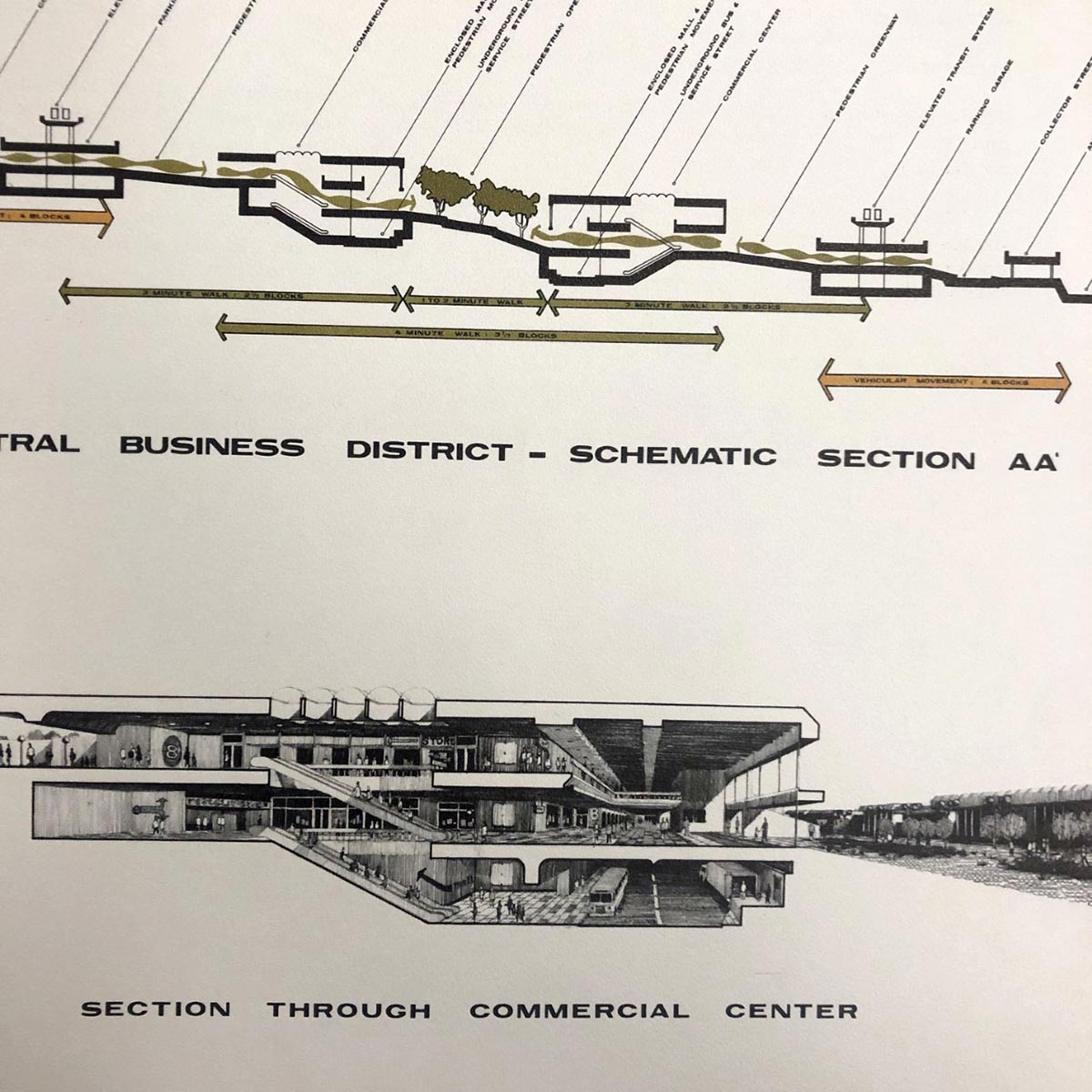 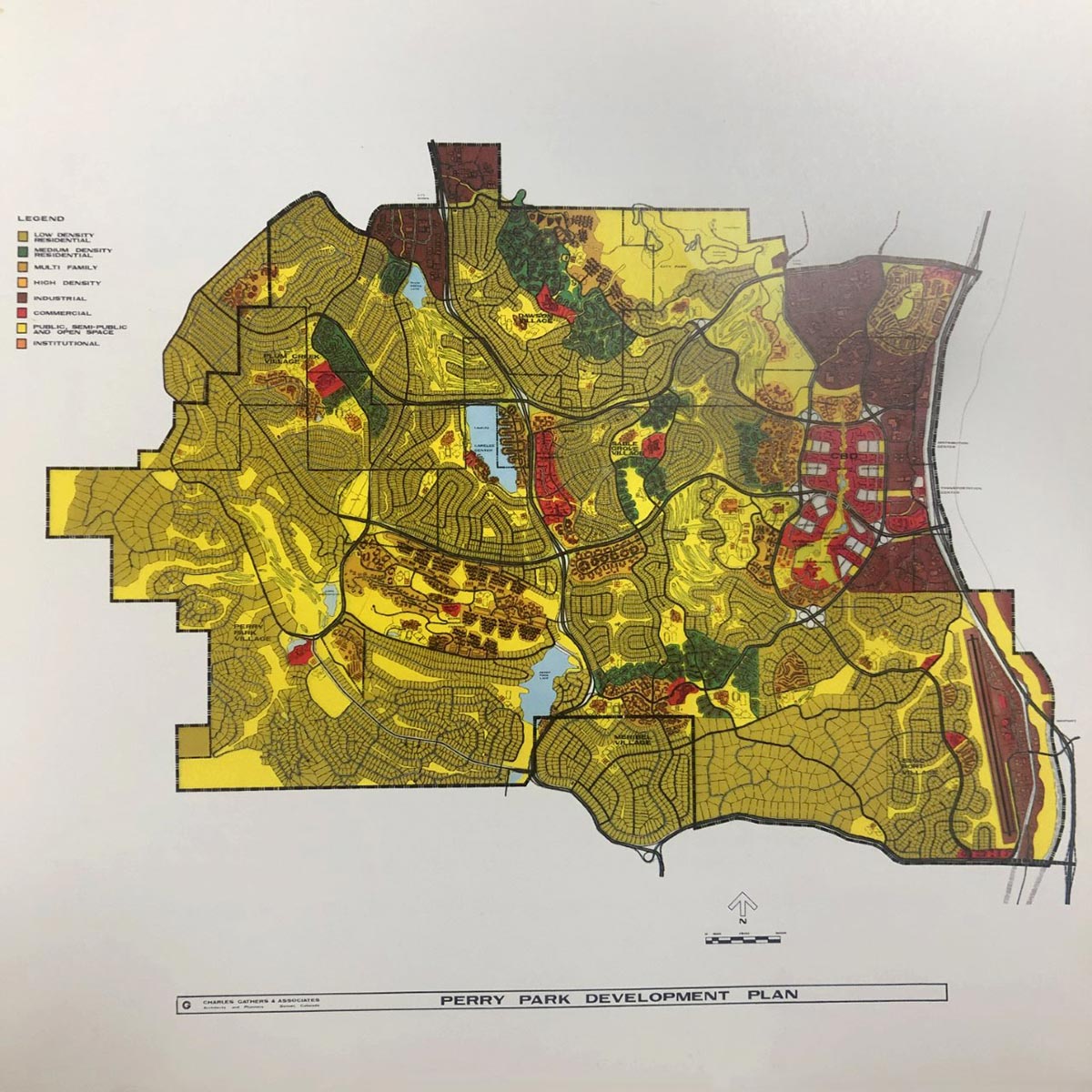 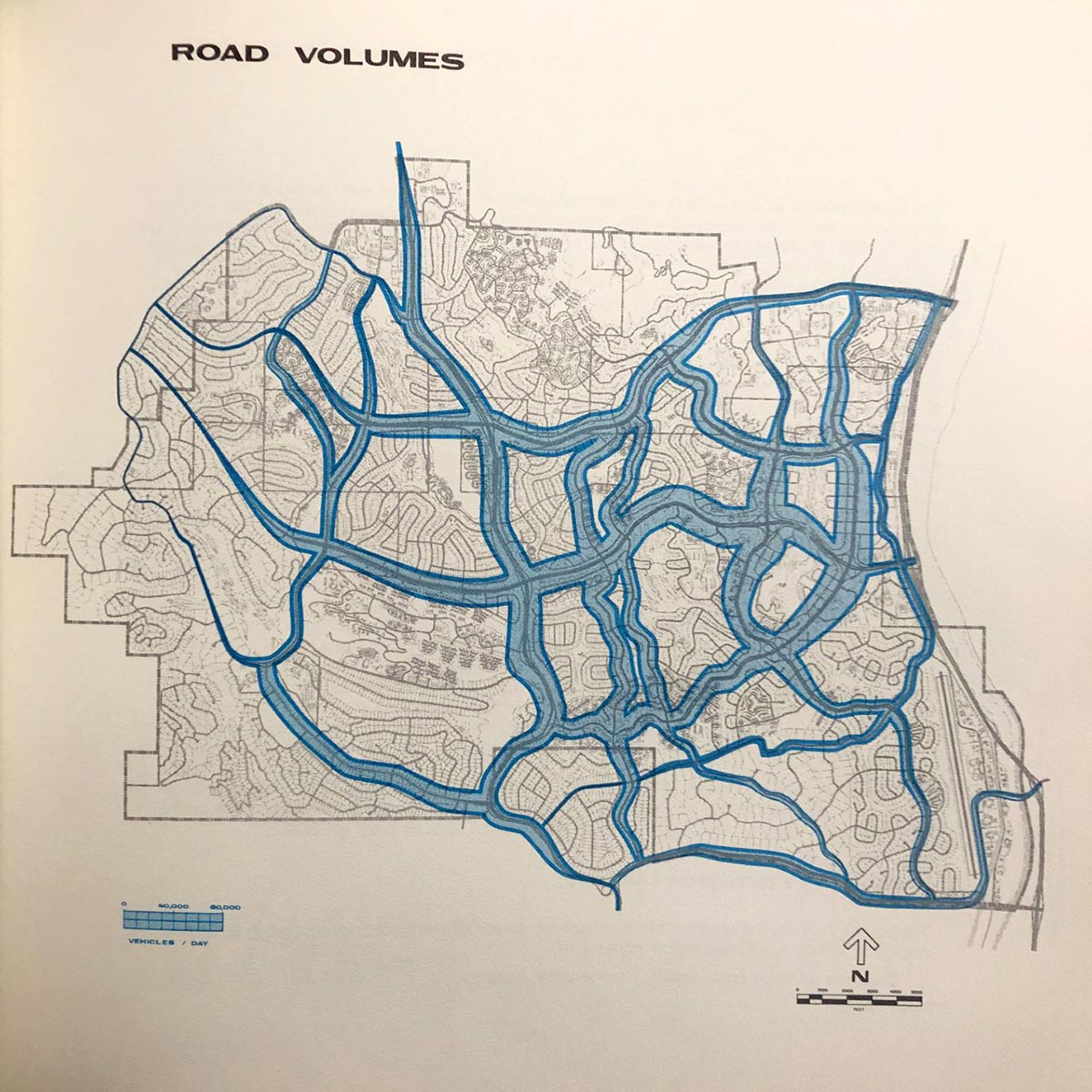 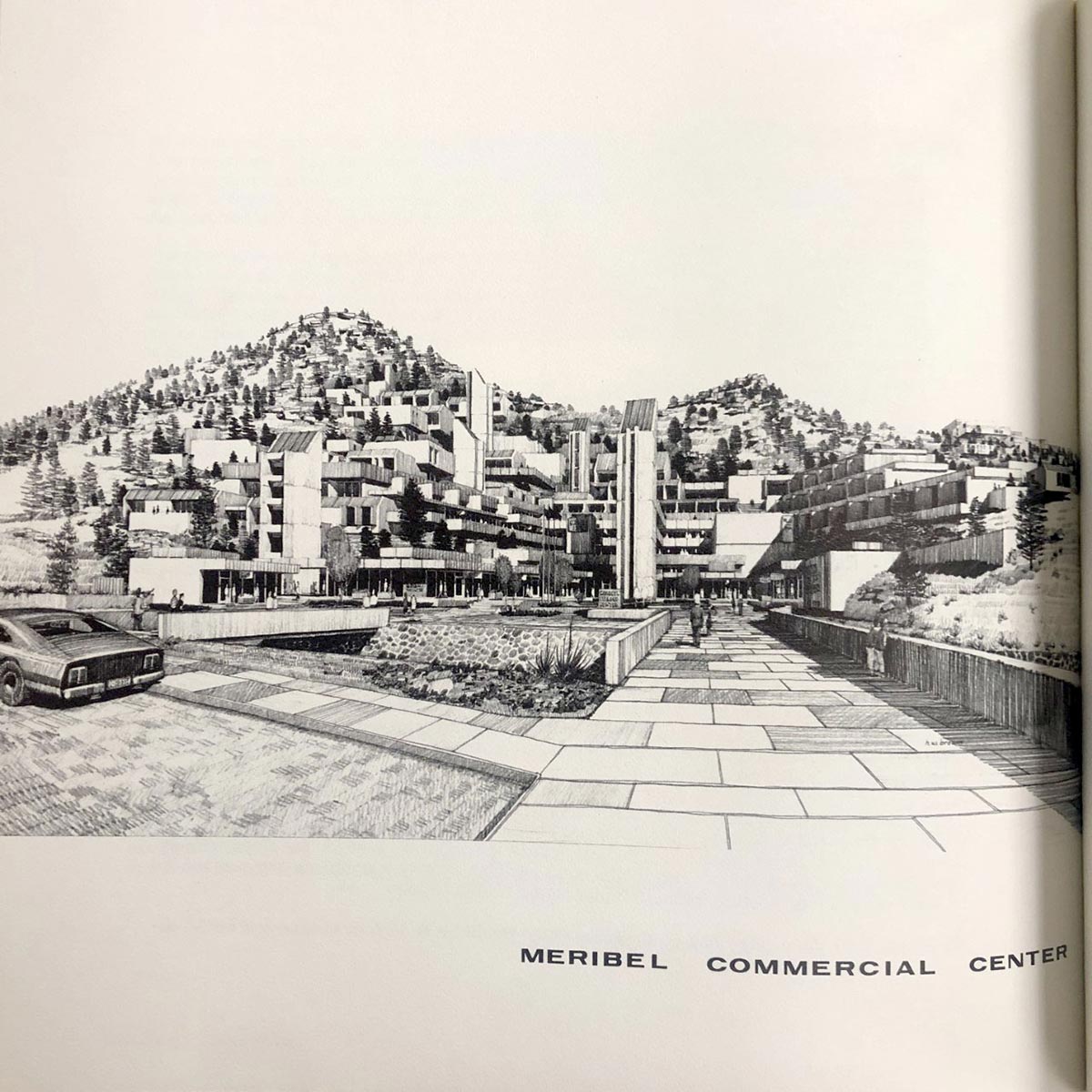 The airport strip actually materialized, with construction beginning in 1969. It still exists adjacent to I-25 and Upper Lake Gulch Road, just a two-mile drive north of Larkspur. It narrowly avoided ownership by the Aviation Christian Transportation Service, a nonprofit with a mission to transport clerics—and Douglas County Christians (only). It’s still in operation today, though it requires permission to use as it is privately owned. 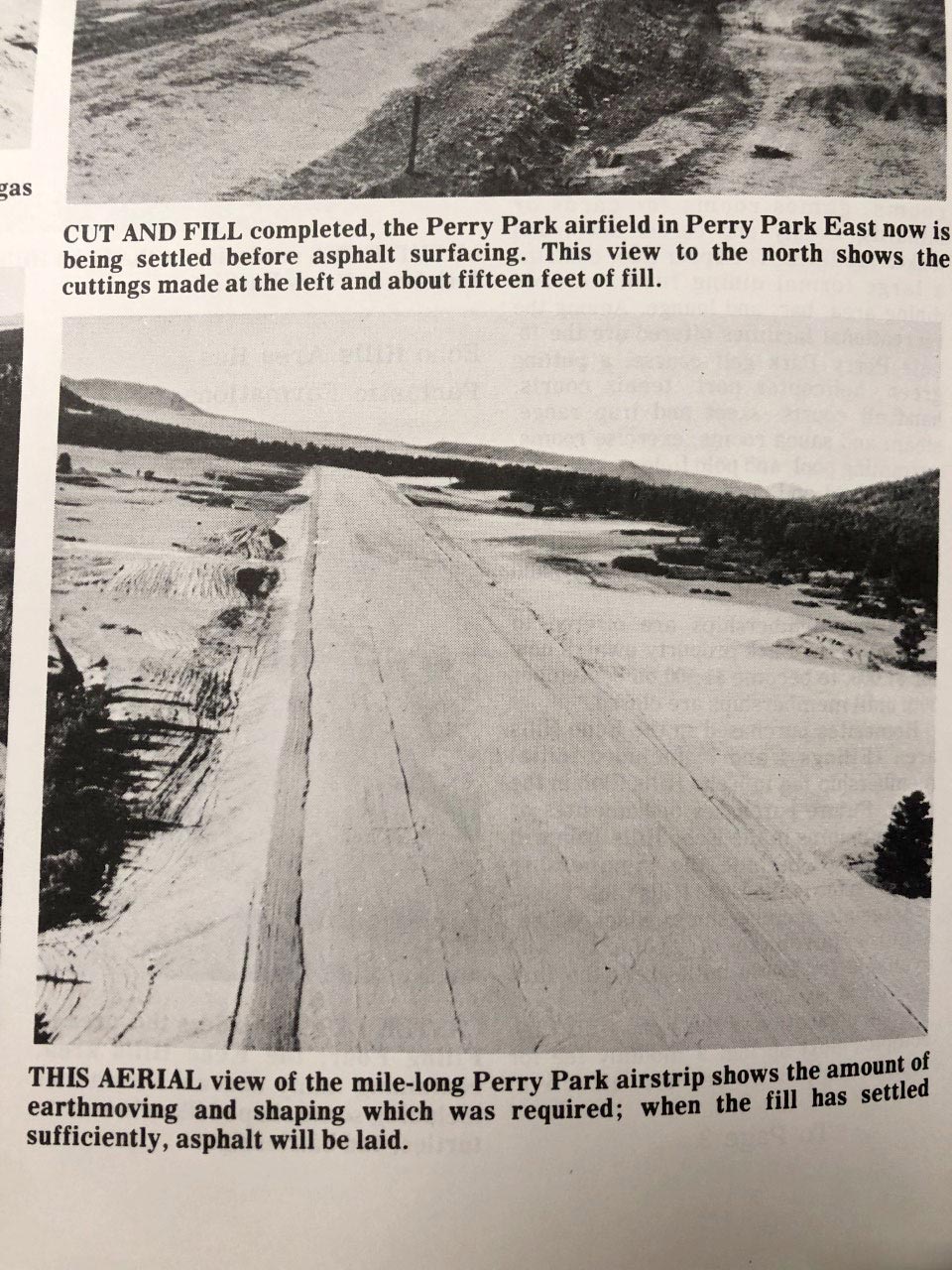 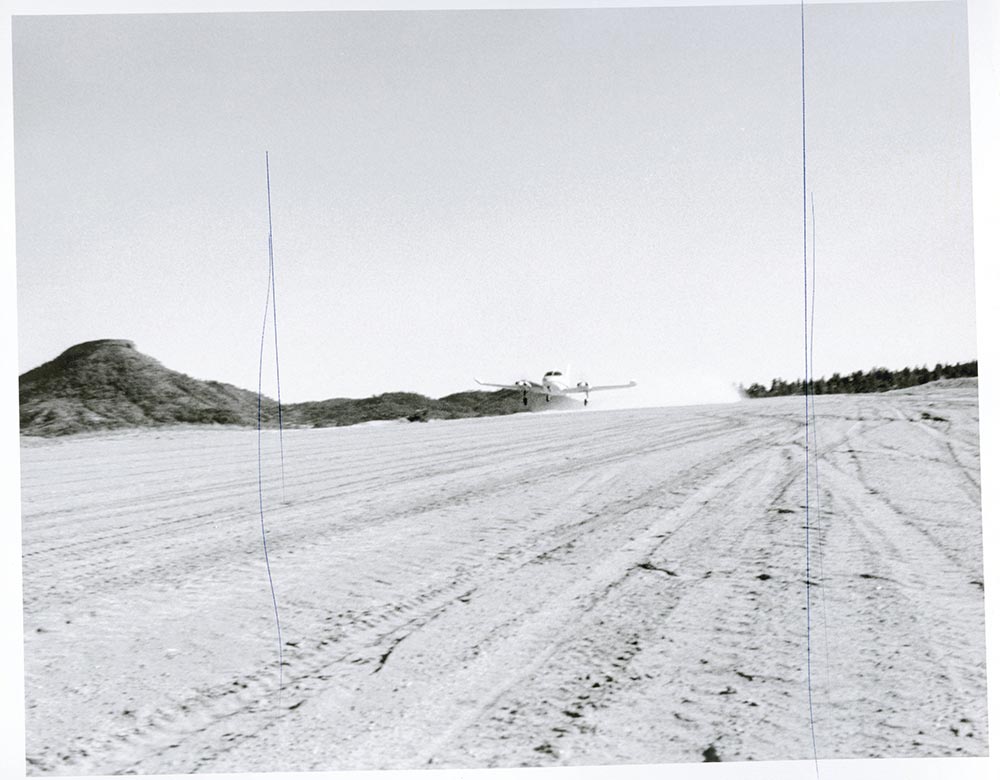 One of the proposal’s most ambitious ideas was the proposed public transit system. It would operate via several components.

And we can’t even get high-speed rail. 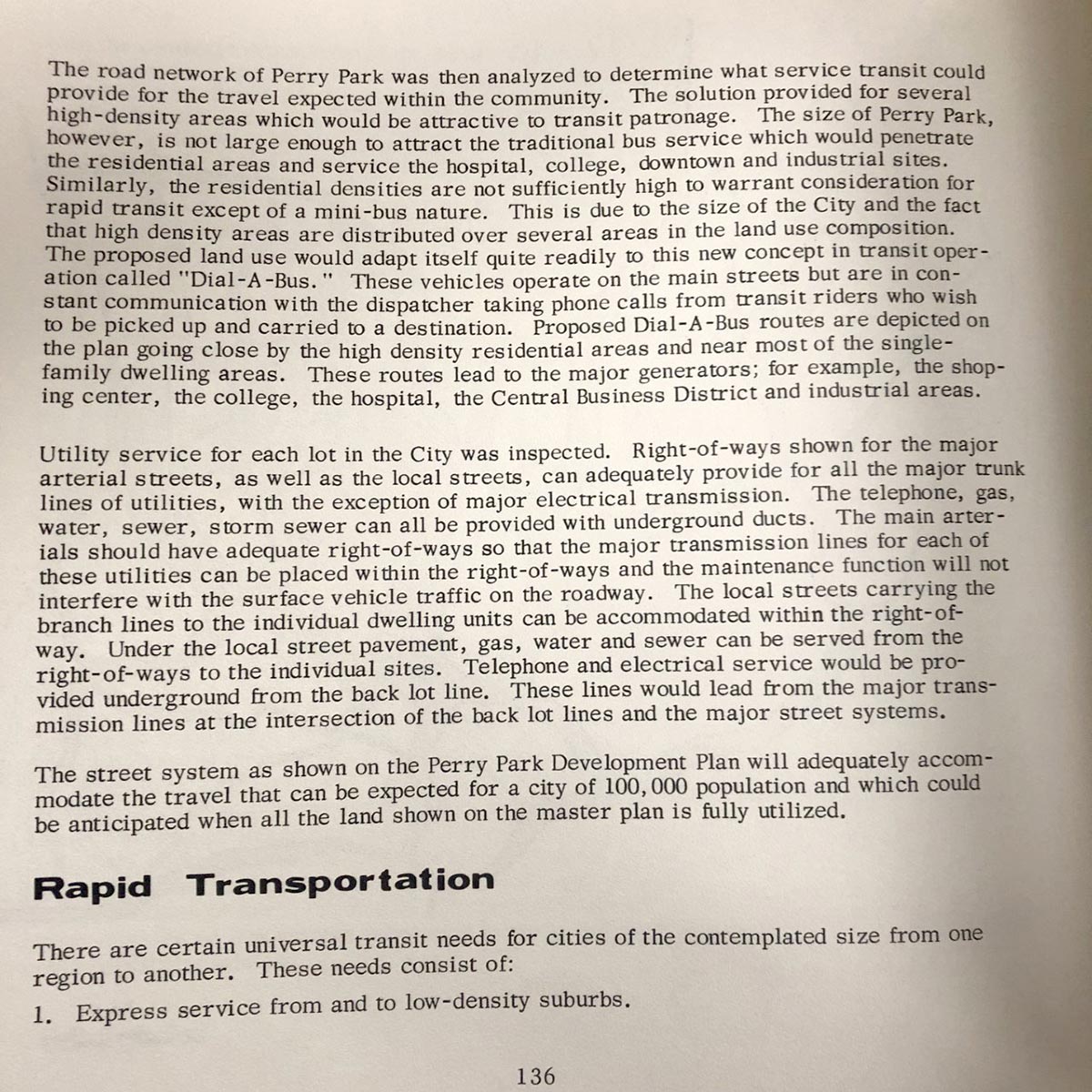 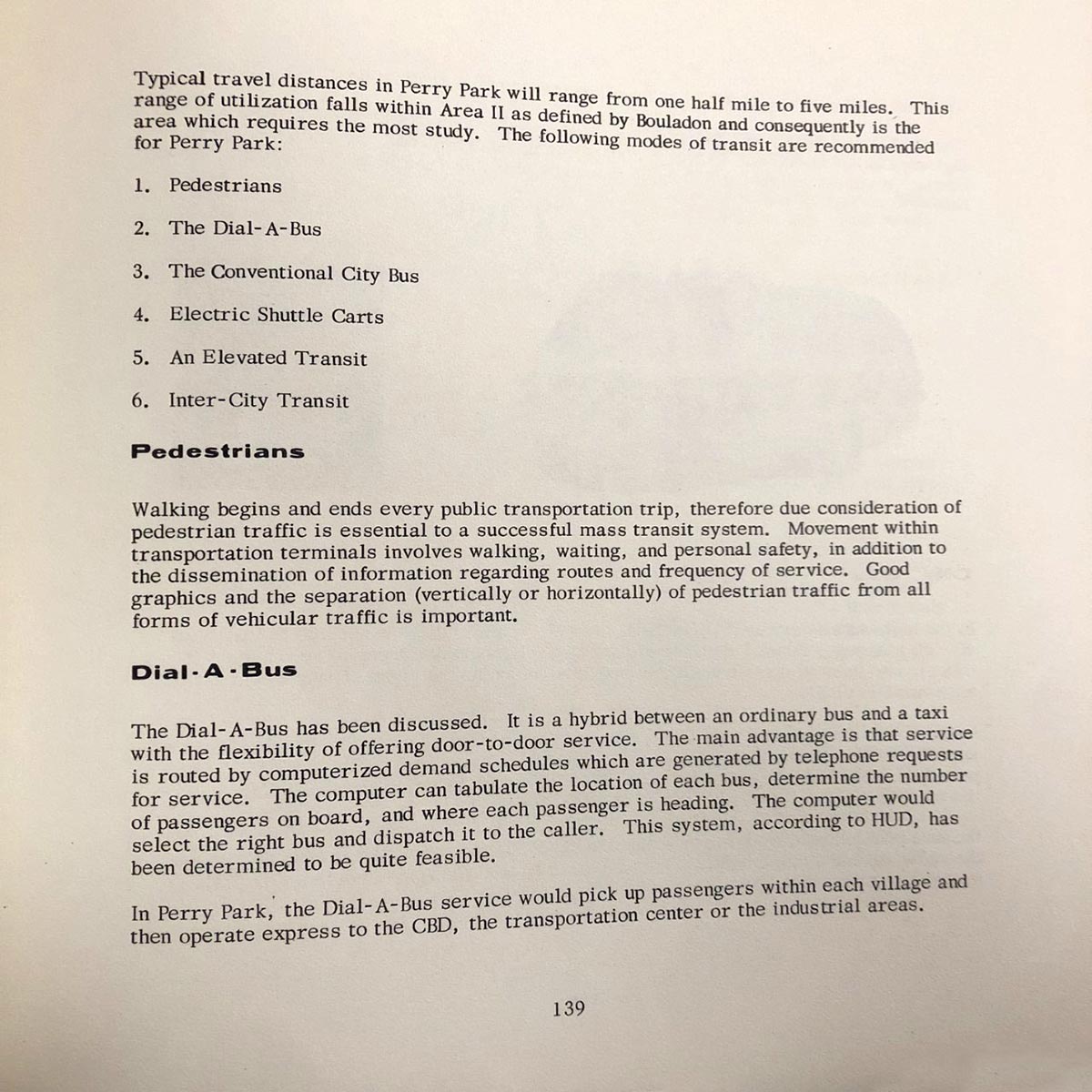 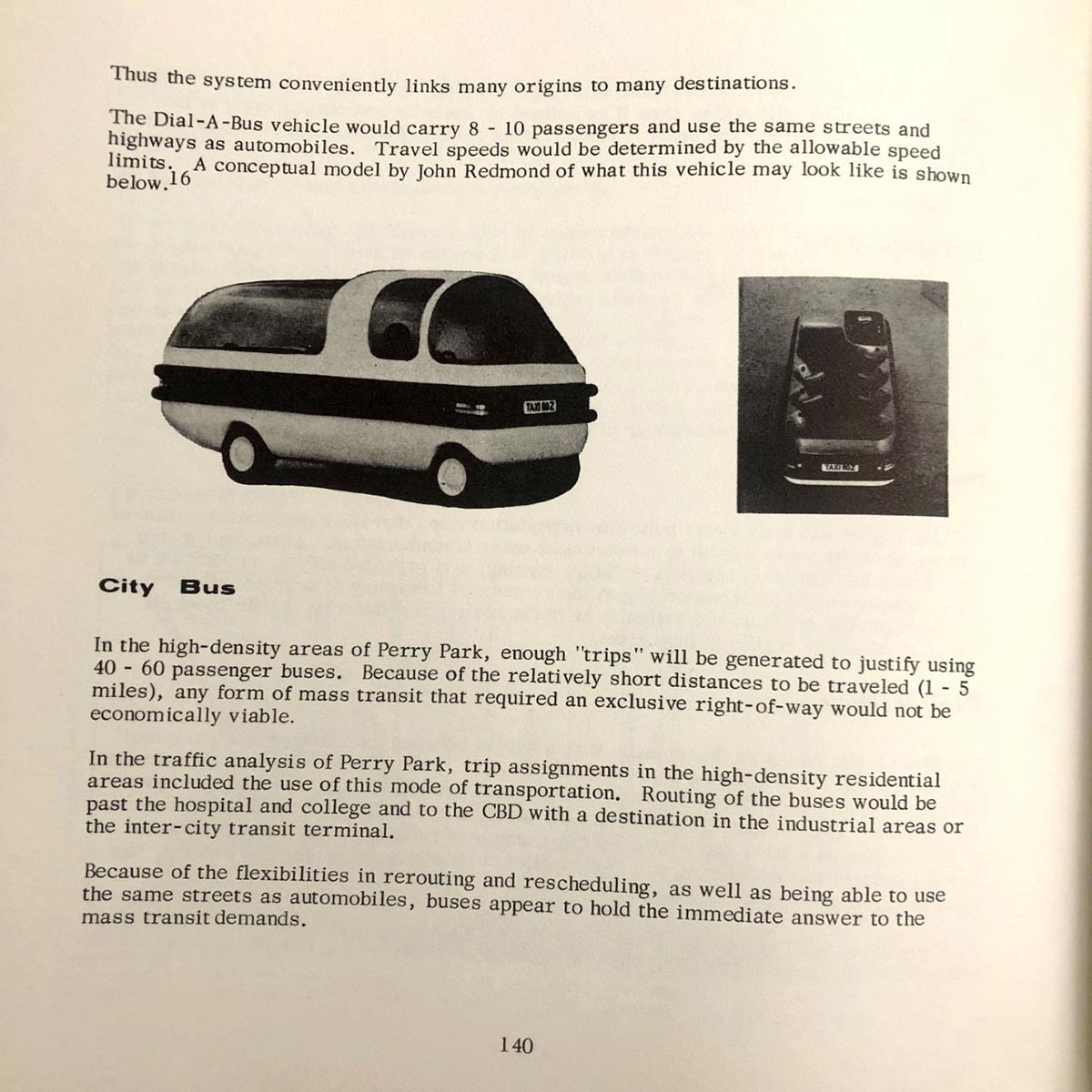 But reality soon caught up. Though a fall 1971 merger of four companies into the Colorado Western doubled their land assets in preparation for the construction of Perry Park’s villages, further plans were thwarted. The Douglas County Planning Commission approved the PVC 3 to 2, but the Board of County Commissioners rejected it in response to strong opposition from locals and citing a lack of water resources and adequate roads (Webb, 61).

Stubblefield had great vision but poor managerial skills, according to Colorado Western Vice President Julius Pickoff and Echo Hills Manager Don Roush (Douglas County News-Press, March 7, 1988). An increasing number of projects (including a partnership in Clubhouse Properties, Inc., building club complexes in the Marble ski area and Manzanillo, Mexico) took his attention away to a degree that he failed to deliver on promised utilities, features and services to Perry Park residents. 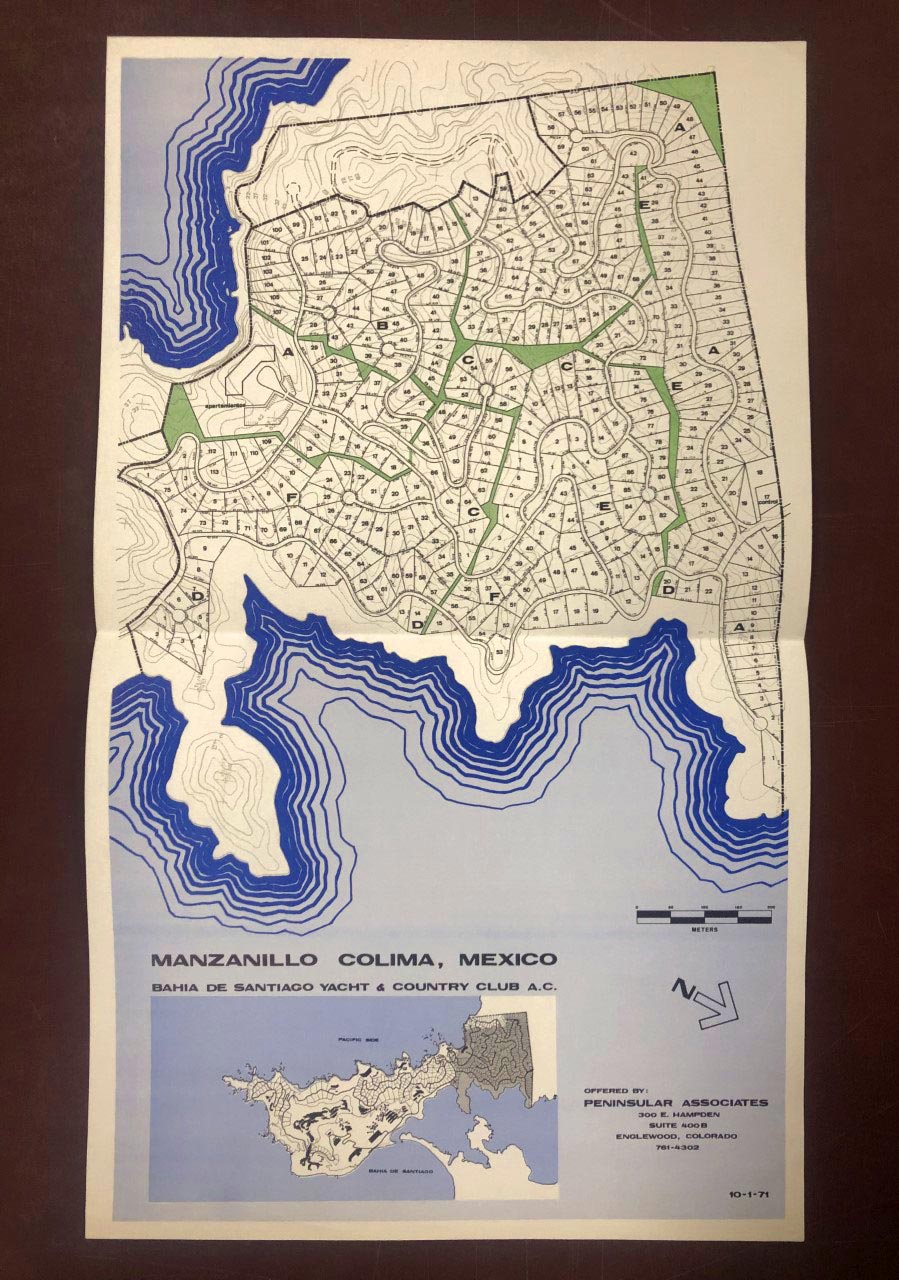 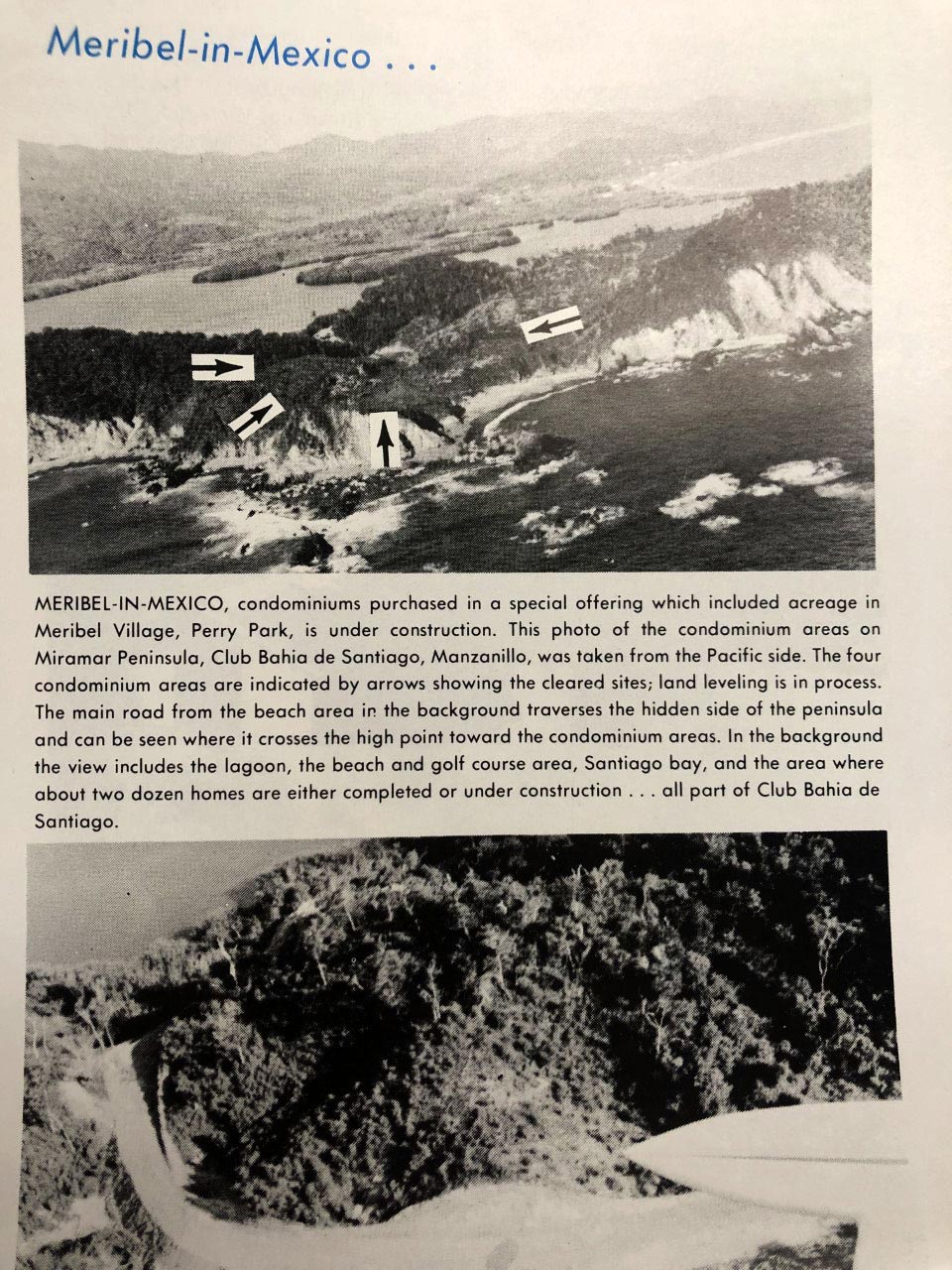 In 1976, a petition was made by residents and club members to form the Perry Park Metropolitan District (PPMD) in order to complete promised public works (Webb, 65). In 1977, the Colorado Western was declared insolvent and the PPMD brought a lawsuit against Stubblefield. They prevailed, and in 1979 Stubblefield’s assets were to be examined at a court hearing. Fearing he’d have to pay the $1.3 million awarded to the plaintiffs, Stubblefield skipped town, living in Aspen and at his Manzanillo, Mexico, property until May 1982, when he was finally arrested in Aspen on his two-year-old warrant.

In a dramatic turn of events, an appeals court reversed the original decision, reducing the award to just $11,000. Purportedly, this was due to the fact that promised amenities in sales literature were not written into sales contracts. Stubblefield didn’t waste time, taking the opportunity to sell most of his assets to Ramon Jarrell. Jarrell, however, did not want to take responsibility for Perry Park’s utilities either, and he sold as well.

It’s unclear what happened to Stubblefield next, though rumors abound among longtime Perry Park residents. Presumably, he left for Mexico with plenty of assets in hand, but no evidence of this could be found.

Today, the Beach Club Santiago’s website recalls a familiar history: two Air Force veterans (including “Texan” Lee Stubblefield) with “great foresight and vision” developed the Miramar Ranch’s oceanfront property in the late 1960s. Then dubbed the Bahia de Santiago Yacht and Country Club, or “Club Santiago” (including the “Beach House”), it also served as “headquarters and office for Sierra Madre Development Company” based in Larkspur, Colorado. Its promised amenities included an 18-hole golf course, an Olympic-sized swimming pool, and a tennis court, though this time jaguar hunting was also an option. But by 1981, club members discovered that they had no rights to the Beach House and that its financial affairs were “hopelessly in arrears.” Once again, club members footed the bill to save it.

And Stubblefield? It’s a mystery what happened to him, but the rest of his life probably involved views like this one. 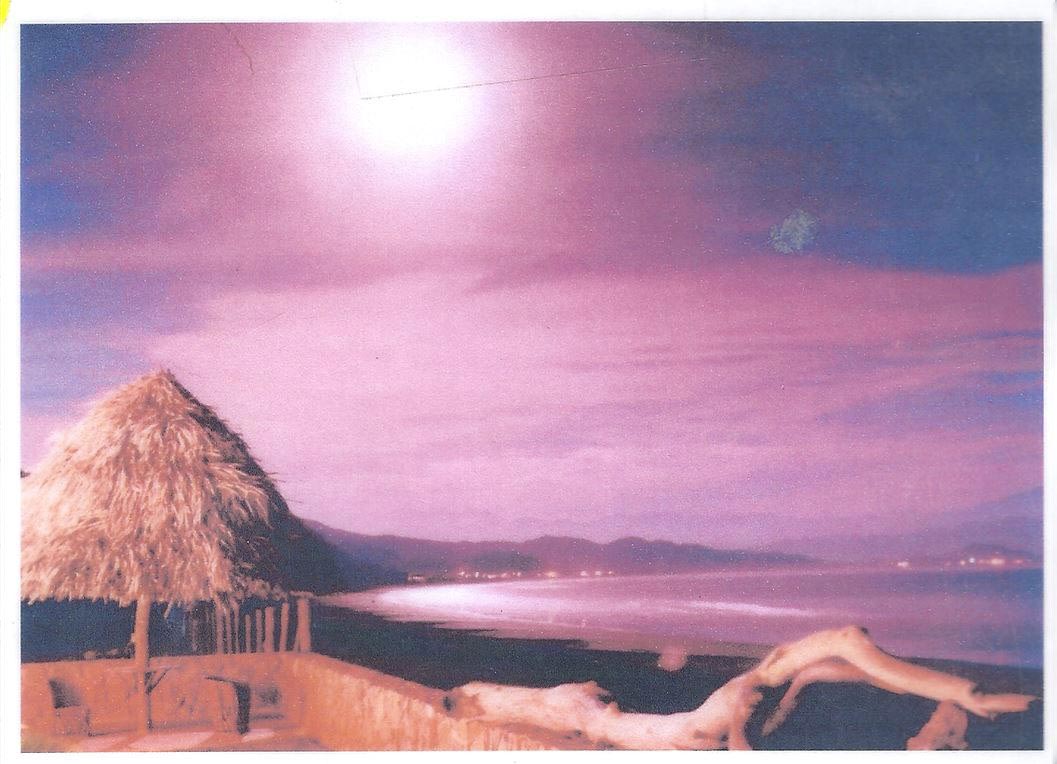 *This article has been updated to reflect Lee Stubblefield’s correct rank of Colonel.

Webb, Ardis. “The Perry Park Story: Fulfillment of a Dream.” Self-published, Denver, 1974. With 2009 addition “Happily Ever After: The Story Continues” by Sally Ward Maguire.

In August 1873 the Colorado Miner and Rocky Mountain News reported the appearance of the first known Douglas County newspaper.

“The copy before us is neatly printed, and displays talent and industry,” read the Colorado Miner on August 28, 1873.

Since Archives & Local History (ALH) possessed no copies of the Douglas County News, we weren’t able to judge for ourselves … until now!

While conducting initial processing of the more than 50 boxes of materials recently acquired by ALH as part of the Metzler estate collection, head archivist Alyssa Carver unearthed four editions of the Douglas County News from 1874, 1875 and 1876.

The earliest paper (from April 29, 1874) is only a clipping but confirms that Edward H. Sturdy was publishing out of Frankstown at the time. In fact, in its early days, the publication was sometimes known as the Frankstown News.

By January 20, 1875, Sturdy was operating out of Castle Rock and describing himself as “the wickedest man in the pencil shoving business” in a tongue-in-cheek advertisement for his own publication. 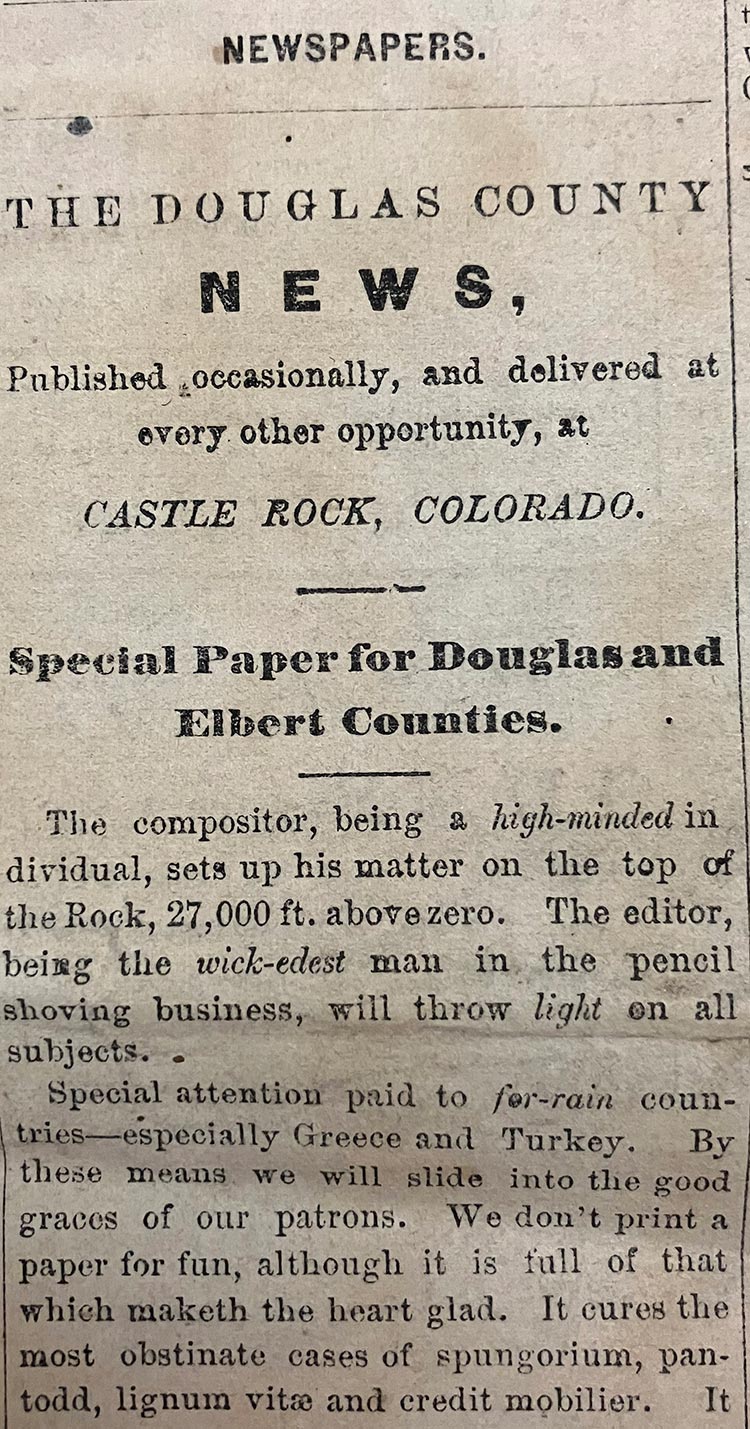 Editor E.H. Sturdy was the "wickedest man in the pencil shoving business."

Clipping from the earliest paper found in the Metzler estate collection, published out of Frankstown at that time. 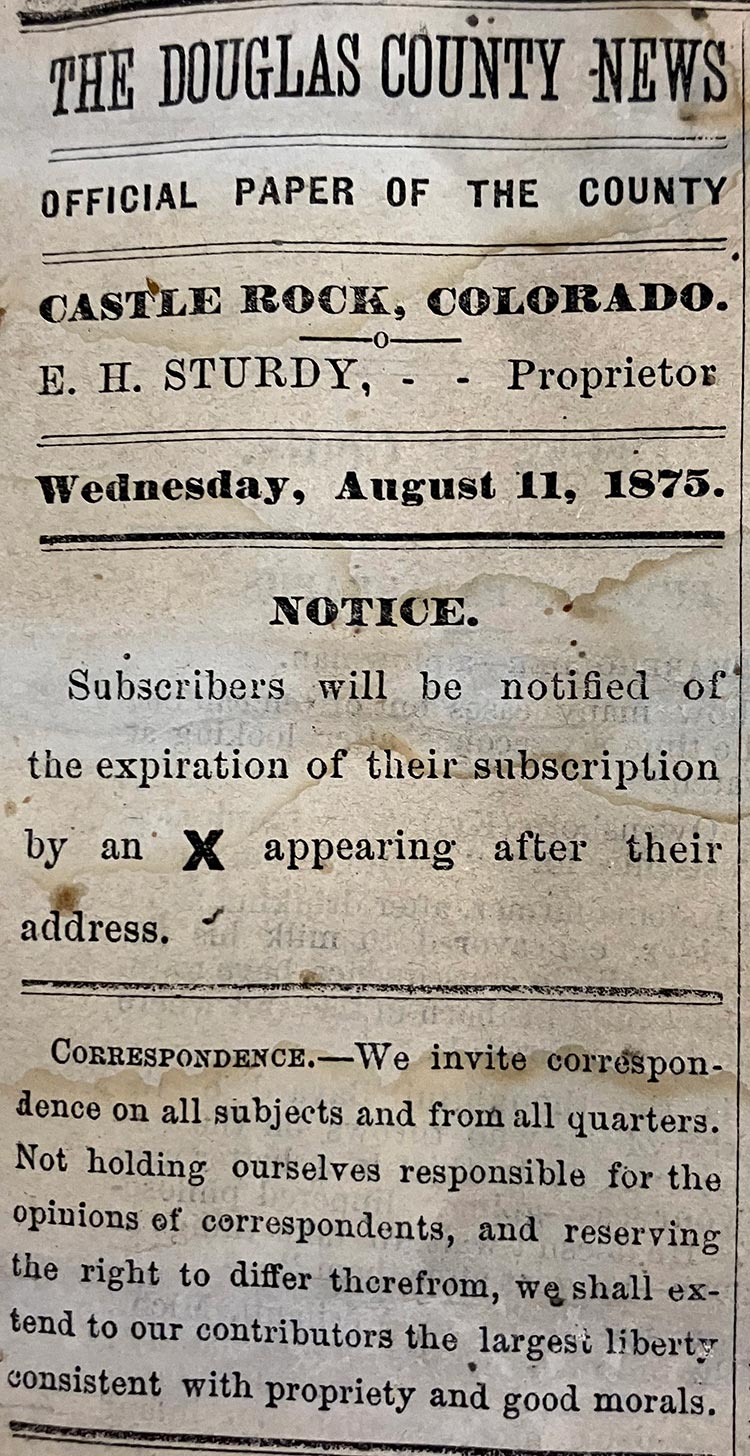 This masthead clipping confirms E.H. Sturdy as the "proprietor" of the Douglas County News on Aug. 11, 1875.

Accounts in other Colorado newspapers indicated that Sturdy left the News for the Cheyenne Sun in September 1876. Shortly before his move, the Golden Weekly Globe referred to the Douglas County News as “the most obscure sheet published in the territory.”

Maybe this is the reason so few copies still exist.

In 1876, the paper passed quickly from T.S. Harris to Walter Spencer. In November 1878, C.E. Parkinson purchased the publication and changed its name to the News Letter. However, Walter Spencer regained ownership in May 1879 and reverted the name to the Douglas County News. Spencer owned the newspaper until it ceased to publish in the winter of 1879.

So what were the people of Douglas County up to in 1874, 1875 and 1876? In January 1875, Thomas Harris, owner of the Star Saloon, was busy serving “good liquors of all kinds, cigars,” and “sardines and fresh oysters” while his patrons enjoyed billiards and “other amusements.”

R.R. Foster hoped to attract business to his Foster House on Perry Street with “good meals and fair dealing to defy competition in the town.” T.S. Harris at the Castle Rock Hotel charged $6 per week for room and board, or $5 if you just wanted to eat but not sleep. Transients coughed up 35 cents per meal.

From the March 1, 1876, edition, we get detailed descriptions of Kiowa ranchers, including Newton A. Gleason, who once ran the California Ranch with Dave Wood. His neighbor and brother Horace Gleason was described as a “dashing bachelor, rides a good horse, has a good heart, and is, with-all, a smart business man.” 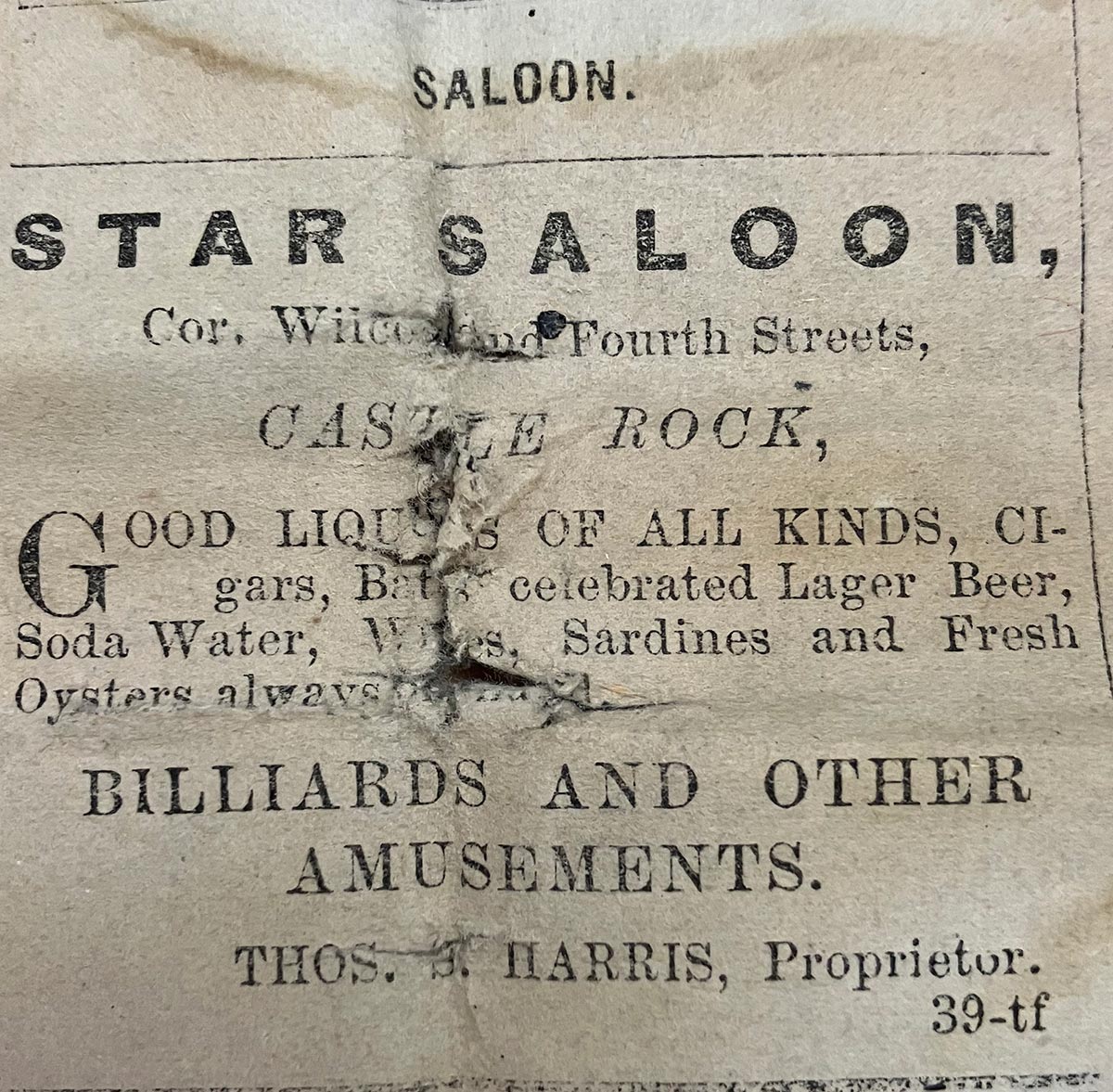 From the Star Saloon, on the corner of Wilcox and Fourth. 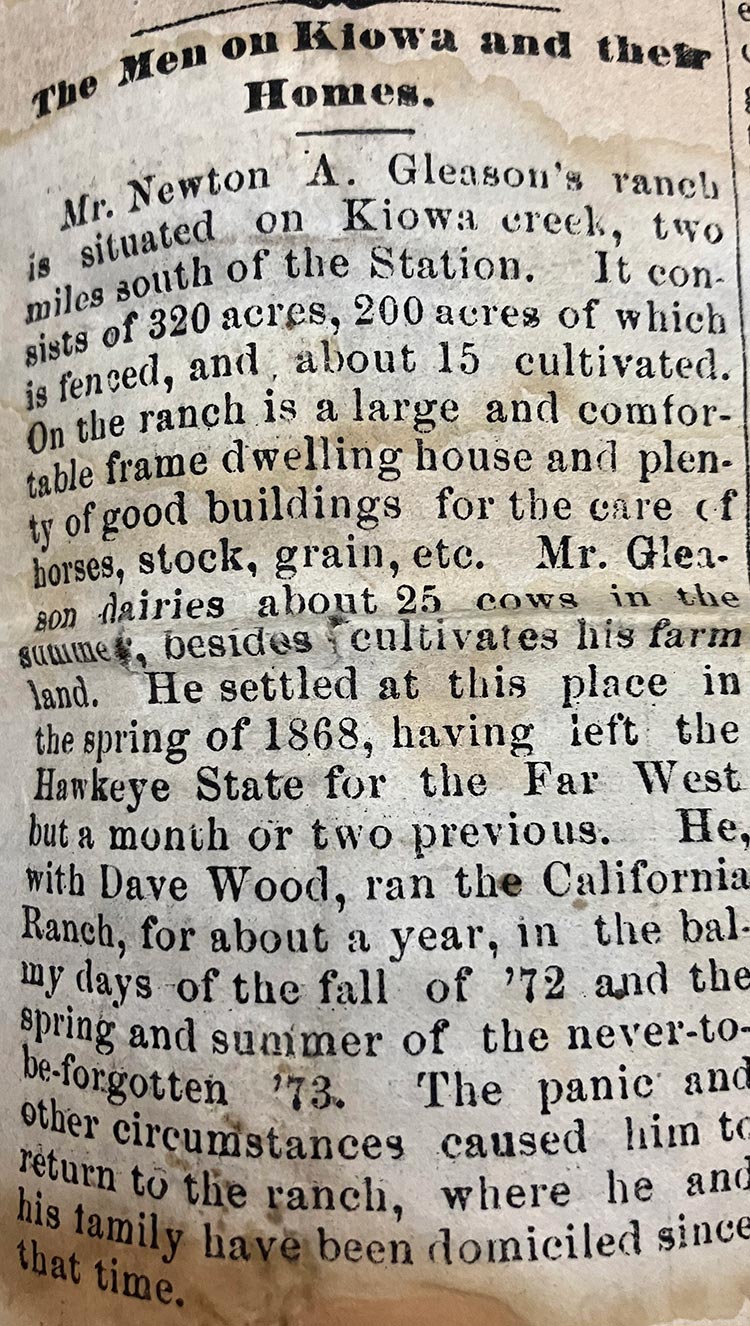 The March 1, 1876, edition included detailed descriptions like this of Kiowa ranchers. 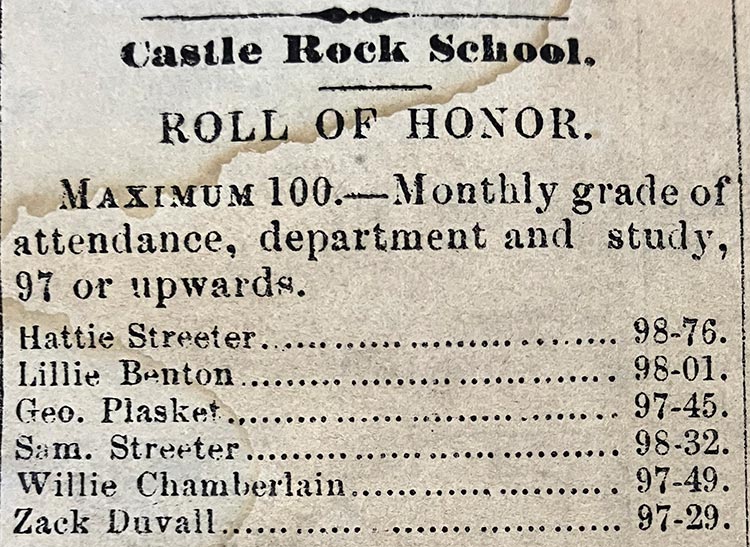 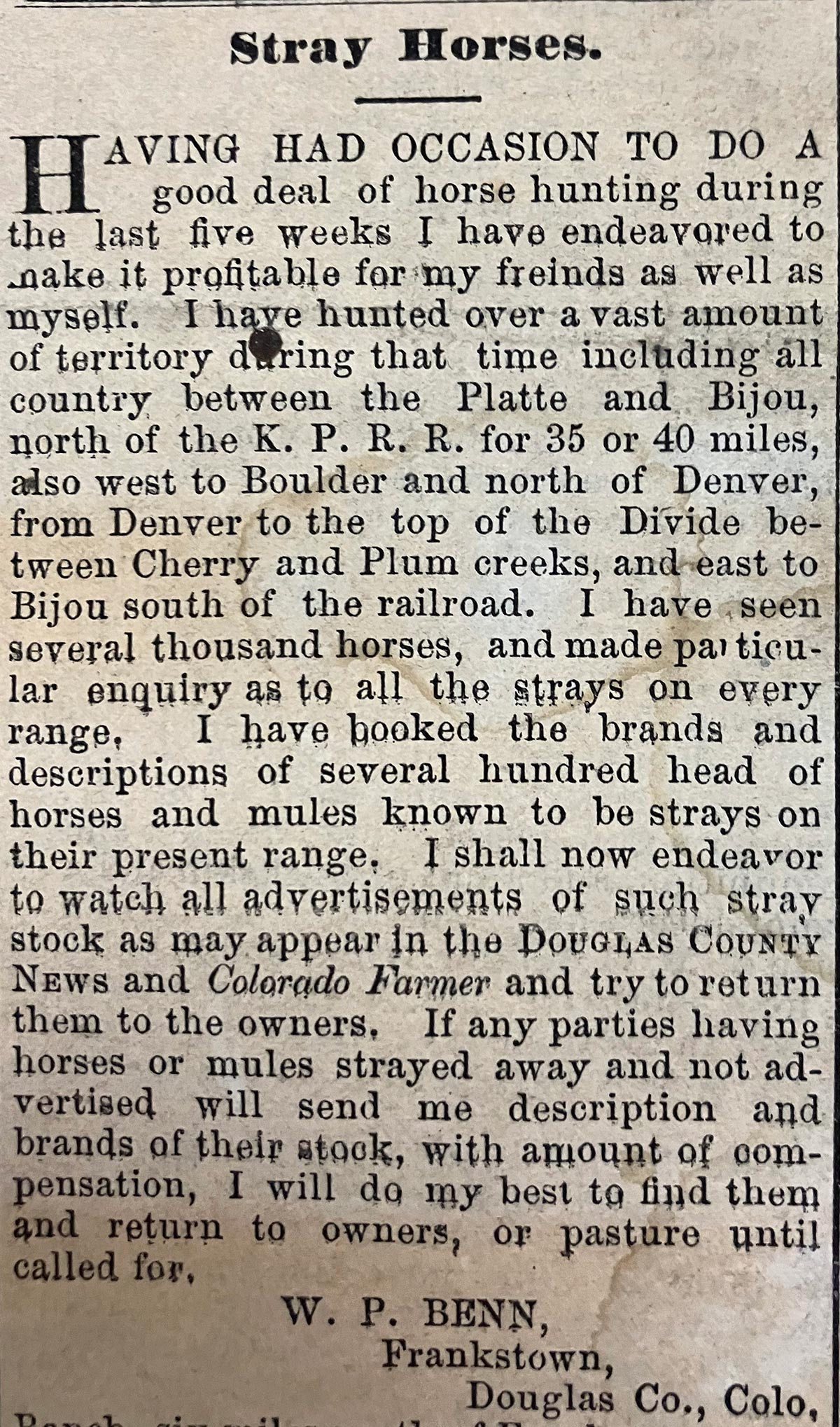 Stray horses on every range. 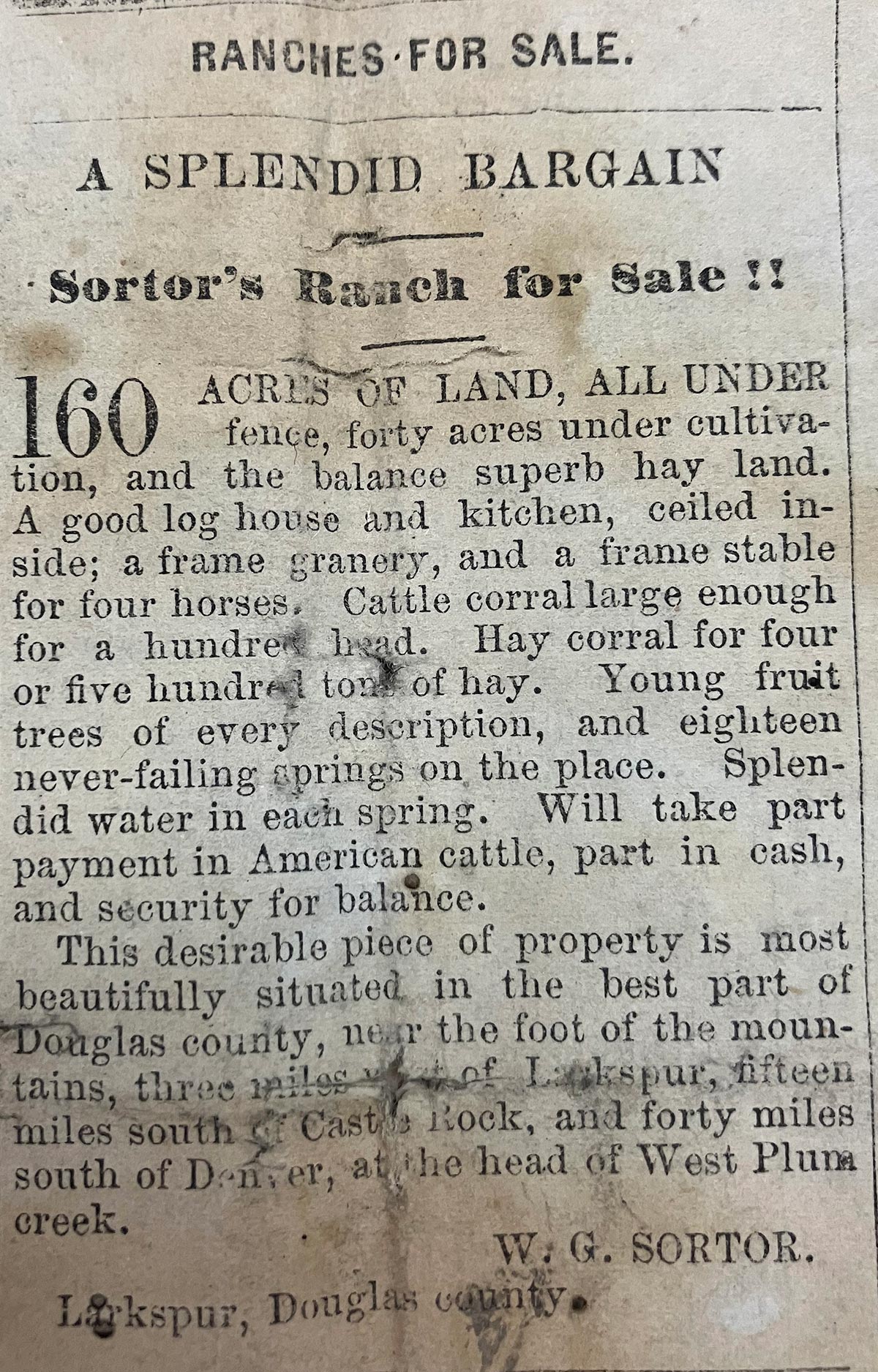 My favorite excerpt from the papers is a letter to the editor written by Patrick McInroy in the August 11, 1875, edition titled “That Mathematical Problem.” McInroy takes issue with an unknown writer’s understanding of basic algebra. McInroy writes, “I claim that F.J.S. simply proves that twice zero is zero, which I fancy everybody knew before. … I have my opinion as to which is the more ignorant of the two of us, and he may have his opinion for all the difference it makes to me.”

After the Douglas County News folded, D.A. Jennings and W.F. Waller began publishing the Castle Rock Independent in January 1880. It, too, had a short life, lasting only about a year. A competing publication, the Castle Rock Journal, launched in June 1880, becoming the first long-lasting newspaper for the county.

To discover more about this topic or items in the archives, please check out ALH’s digital collections or contact archives staff at (303) 688-7730.